The uterus is a hollow organ about the size and shape of a pear. When a woman is pregnant, the fetus grows in the uterus, which is also referred to as the womb. The uterus has two main parts: the cervix, which is the “neck” of the uterus that extends into the vagina, and the upper part, or the body or corpus of the uterus. 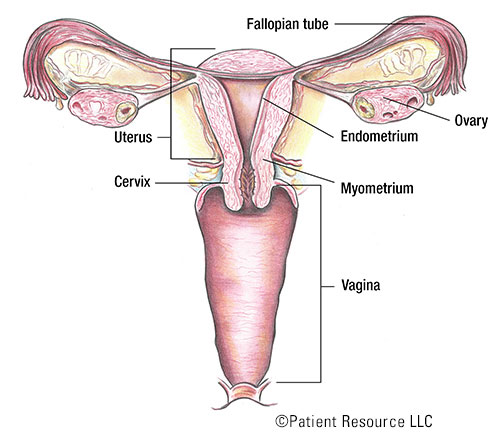 Endometrial cancer is often staged based on the surgical removal of the tumor. To establish whether the cancer cells have spread, the surgeon may also remove nearby lymph nodes, tissues and fluid within the pelvic and/or abdominal cavity. A pathologist’s examination of these samples and information from imaging tests help the doctor determine an accurate and exact stage, which is the most important factor in choosing an appropriate treatment option.

Like many other cancer types, endometrial cancer is classified according to the tumor, node, metastasis (TNM) system developed by the American Joint Committee on Cancer (AJCC). The tumor (T) is analyzed and categorized based on its size and location, whether cancer cells occupy nearby lymph nodes (N), and whether cancer cells have metastasized (M) or spread to other organs and body parts. Once an endometrial cancer has been classified with this system, an overall stage is assigned (see Staging Illustrations).

Used with permission of the American Joint Committee on Cancer (AJCC), Chicago, Illinois. The original and primary source for this information is the AJCC Cancer Staging Manual, Eighth Edition (2017) published by Springer Science+Business Media.