Learn to prevent and control side effects 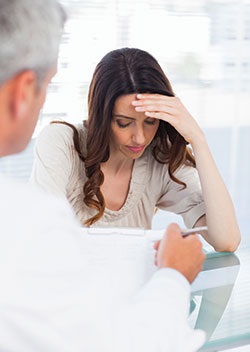 Nausea and vomiting are different from each other, but they are often experienced together. Nausea is an unpleasant sensation of feeling the need to vomit, or throw up, and is often described as “sick to my stomach” or “queasy.” Vomiting occurs when the stomach muscles contract and push the stomach contents up through the mouth.

Nausea and vomiting are unpleasant, usually cause distress (for the person with cancer as well as family members), and can limit activities. These side effects can also worsen other symptoms, such as pain, insomnia, cognitive dysfunction, fatigue and anorexia. If vomiting is not controlled and becomes severe, it can lead to dehydration, a lack of essential fluids and minerals in your body. Most importantly, severe nausea and vomiting can interrupt your cancer treatment plan. Thus, it is important to control these two symptoms.

Why do nausea and vomiting occur?

Nausea and vomiting occur as the result of a series of reactions between your stomach and your brain. These reactions start when chemotherapy or radiation damages the cells lining the inside of the stomach. The cells send signals to a vomiting center in your brain, which then sends signals to trigger nausea and vomiting. Chemotherapy may also trigger the vomiting center directly.

Who is most likely to be affected by nausea and vomiting?

There are individual differences that affect the likelihood of having nausea and vomiting. These side effects are more likely to occur in women, people younger than 50, people who are anxious, and people who have had motion sickness.

When do nausea and vomiting occur?

Nausea and vomiting related to opioids usually occurs within a few hours of a dose. Over time (usually three to seven days), a person can develop tolerance to an opioid, which means that the drug will no longer cause nausea and vomiting.

Table 1. Timing of nausea and vomiting related to chemotherapy

How are nausea and vomiting managed?

Prevention of nausea and vomiting related to radiation therapy follows a similar approach. If you are to have total body radiation or radiation to the upper abdominal area, your doctor will prescribe an antiemetic drug to be taken before your scheduled treatment and for a period of time after treatment.

To help further protect yourself from nausea and vomiting, you may want to supplement your antiemetic treatment with some non-drug approaches. Some people have been helped by such strategies as progressive muscle relaxation, biofeedback, guided imagery, self-hypnosis and acupuncture. Some changes to your eating habits may also be helpful:

Try bland, easy-to-digest foods like crackers. Ginger and peppermint can also help with nausea, so you may try ginger ale or peppermint tea. Avoid eating your favorite foods because after your chemotherapy is completed, it might not be your favorite food anymore if you associate it with eating it while receiving this type of treatment.

When should I talk to my doctor?

Call your doctor immediately if you: