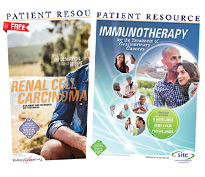 Receiving a cancer diagnosis often leads to many emotions, unanswered questions and concerns. This publication will help answer many of your questions, give you a better understanding of the disease and what you can expect, and offer valuable resources where you can find additional information. The more you know about your diagnosis, the more prepared you will be to make decisions about your treatment.

Because renal cell carcinoma (RCC) affects the kidneys, it’s important to be familiar with the anatomy and function of normal kidneys (Figure 1). The kidneys are a pair of bean-shaped organs located in the back of the abdomen. There is one on each side of the spine, and they’re protected by the lower rib cage. Each kidney is about the size of a fist.

The kidneys are part of the urinary tract, and their main function is to filter the blood. All of the blood in the body passes through the kidneys many times each day, and the kidneys filter out excess water, salt and waste products. The end result of this filtering process is urine, which then travels to the bladder, where it’s stored until urination. The kidneys also play a role in controlling blood pressure and making red blood cells.

It is estimated that cancer of the kidney will be diagnosed in nearly 64,000 people in the United States in 2017. RCC is the most common type of cancer arising in the kidney, accounting for nearly 90 percent of all diagnoses. RCC is classified into subtypes according to what the tumor cells look like under a microscope. The most common subtype is clear cell RCC, which occurs in about seven of every 10 cases of RCC. Other subtypes include papillary, chromophobe, medullary and collecting duct RCC. The disease also can be “unclassified” when more than one type of cell is present and the cells don’t fit into any of the subtype classifications. Knowing your particular subtype is helpful because treatment choices may differ according to your specific type of disease.

RCC begins when abnormal cells in the kidneys start to grow out of control and form one or more masses — or tumors — in the kidney. RCC may involve just one tumor in one kidney or may involve several tumors in both kidneys. The most common symptom of RCC is blood in the urine, also known as hematuria. However, sometimes tumors are found on imaging studies that are being done for another reason. More of these so-called “incidental” RCC tumors have been found as the use of imaging studies has increased. In some people, the cancer cells have already spread beyond the kidney at the time of diagnosis to one or more distant sites in the body; this is known as “metastatic” or “advanced” cancer. Treatment of metastatic cancer is directed at not only the primary site in the kidneys but also the metastatic site(s), or sites where the cancer has spread.

The precise cause of RCC is unknown, but several risk factors may increase the chance of getting this disease. RCC occurs more often in men than women and is slightly more common in the African-American population than in the white population. In addition, the risk of RCC is slightly higher for people who have a close family member (especially a brother or sister) with the disease. Inherited conditions can also raise the risk. Von Hippel-Lindau (VHL) syndrome, a rare inherited disease caused by a mutation (abnormality) in the VHL gene, is associated with an increased risk of RCC. Testing can be done to determine if the VHL mutation is present in other family members.

Horseshoe kidney, which affects about one in every 500 children, is another inherited condition that can raise the risk of RCC. With this condition, the kidneys fuse together during development of the fetus to form a “U” shape — similar to a horseshoe — instead of developing normally.

Other risk factors for RCC include cigarette smoking, obesity and high blood pressure. Dialysis treatment, which removes toxins from the bodies of people whose kidneys are not working, increases the risk of RCC, as well.