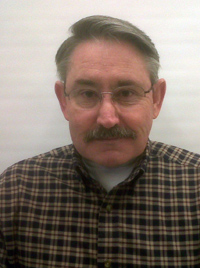 C.W. Moreland was diagnosed with Stage IV laryngeal cancer but has learned to regain his voice through hard work and family support.

Sometimes life just doesn’t make sense, and I learned that lesson best when I was diagnosed with Stage IV squamous cell cancer of the larynx. Doctors typically refer to it as a smoker’s cancer, but I’ve never been a smoker, so I’m not sure how or why I developed the disease.

Difficulty swallowing and a raspy voice led me to seek treatment where doctors eventually diagnosed me with the cancer. After three “second” opinions, all we knew for certain was that it was a form of slow-growing cancer that required surgery and radiation. Doctors weren’t sure how radical the surgery would be until they opened me up. They did warn me, however, that I’d lose my voice and have to breathe through a stoma, an opening that doctors created in my neck after removing my voice box.

I had my surgery and then underwent 30 sessions of radiation. Part of my surgery included a tracheoesophageal puncture, or TEP, where doctors created a small puncture between my trachea and esophagus to insert a one-way air valve. This air supply causes vibrations in a similar manner to esophageal speech, and that’s how I communicate. I also use an artificial larynx, a battery-operated device that doctors surgically placed under my mandible. It also produces vibrations to allow my speech to be more clear.

Although communicating can be a bit of a challenge and I have some side effects from the radiation, I try not to dwell on those negatives. Life is good and the cancer hasn’t returned. I am so thankful for my family, who supported me throughout my sickness and recovery. I’m back to work and love spending my free time with my wife and two grown sons. I think keeping an indomitable spirit and positive attitude during the rough times makes all the difference. There are always going to be challenges, but I’m proof that with diligent work and the grace of God, anyone – even cancer victims – can still experience a good quality of life.