The Face of Self-Advocacy 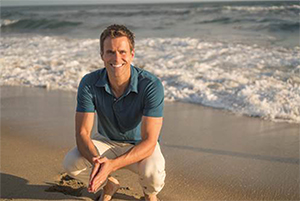 Cameron Mathison just has one of those faces. He is often recognized from his many television, movie and hosting roles, including 13 years as Ryan Lavery on the daytime soap opera “All My Children” and current co-host of the weekday talk show “Home and Family” on the Hallmark Channel. But in late 2019, he stepped into the spotlight for a new role: a renal cell carcinoma survivor who is a steadfast supporter of being your own best advocate.

For five years, Cameron struggled with gastrointestinal issues. Various doctors and tests didn’t find anything alarming. He had a low white blood cell count, stomach problems and a lack of energy, but nothing pointed to a specific cause for these symptoms.

Although he felt certain that everyone thought he was a hypochondriac, he didn’t let it go. He is a firm believer in listening to his body, and his body was telling him that something wasn’t right.

“I’ve always been very interested in nutrition philosophies and meditation,” he explained. “I do a lot of research, and if I feel something will benefit my health, patience or mindfulness, I’ll take the information and apply it. I’m almost scientific about it, so when I was incredibly diligent, doing what I consider ‘all the right things’ for my body and still wasn’t feeling better at my core level, I knew something was up.”

Finally, he insisted on having an MRI of his abdominal area, hoping that would shed some light on the gut issues.

“Later that day, I was on the golf course. The sun was shining, and my phone rang. I looked down and saw it was my doctor. That was a red flag because you hardly ever get test results on the same day.”

The MRI had, indeed, uncovered something alarming: a tumor on Cameron’s right kidney. He had renal cell carcinoma (RCC).

“In my heart, I’d known something was wrong, but actually hearing the diagnosis was bizarre. It felt like a dream that seemed so real, but one I wanted to wake up from.”

"She was driving, so I made sure she was alone. I didn’t want the kids to know yet because, at that point, I didn’t have much information. All I knew was that it was cancer, but I didn’t know how serious it was. Would I be okay? Could I die?”

Vanessa’s response set the stage for the incredible support Cameron would have from that moment on.

“We’ve got this,” she said, and they both kicked into gear. He is still amazed at how seamlessly everything fell into place after that.

They knew they needed more information. To help understand the MRI report, he shared it with a good friend who is a physician in Canada.

“He said it didn’t appear to have spread anywhere else and wasn’t in my lymph nodes, which was good,” Cameron explained. “After some quick research while we were on the phone, he gave me the name of the specialist he would contact if he were in my shoes. As luck would have it, that doctor happened to be right here in Los Angeles. He actually had a cancellation for the following Monday, and I jumped on it.”

They met with the doctor and discussed the treatment plan: surgery to remove the tumor. Cameron left the appointment confident and much more educated about his diagnosis.

“This specialist is a leader in the field and a walking encyclopedia,” he laughed. “He provided so much information, from surgery statistics and how the procedure may affect nearby blood vessels to how many incisions I’d have and the recovery time. He also confirmed that none of my symptoms were telltale signs of RCC. They were my body’s way of telling me it was working on something else.”

Next was the task of telling their 16-year-old son and 13-year-old daughter.

“I tend to get emotional,” he admitted, “and I really didn’t want that to happen. I wanted them to feel confident, and that would only happen if I came across as confident. So, I practiced what I’d say. Not like I was rehearsing a role, but just enough so I could get through it without breaking down.”

Together, he and Vanessa shared the news honestly and realistically.

“We told them I had cancer in my kidney, and that I had the best doctor in the world who felt the prognosis was very positive. He didn’t think it had spread, but obviously, it was very serious. They, of course, were loving and supportive. It was an emotional conversation, and one of the hardest things I’ve ever done in my life.”

The surgery took place soon after, and the doctor successfully removed 20 percent of Cameron’s right kidney along with a 4.2 centimeter tumor. After a four-day hospital stay, he was released.

“The surgery was fast and went as planned. It was done laparoscopically, and I had no problems at all with the procedure itself or the incisions. I am so grateful. The only discomfort I really had was the after effects of the gas the doctor used to inflate my torso so he’d have room to operate. That took a couple of days to dissipate but, once it did, I felt fantastic. So fantastic, in fact, that I ignored everyone’s advice about giving myself enough time to recuperate.”

Fifteen days after surgery, he was back on set.

“That was not a Hallmark Channel mandate. They suggested I take more time, but I felt ready. I wasn’t, and that is 100 percent on me.”

After forcing himself to slow down a bit, Cameron returned to his regular routine. Today, he is cancer-free and feels good. He has follow-up medical appointments that will continue for some time. He is also more motivated than ever to continue his healthy lifestyle.

“I eat a good quality, super low carb diet because that’s what is best for me and my body. It gives me the most energy. I also do it to keep my gut issues in check and for cancer prevention. My doctor felt the tumor had been growing for several years, and it’s possible that my healthy lifestyle prevented it from thriving and having the energy to move beyond my kidney.”

Cameron can’t emphasize enough how important it is to be your own best advocate and really persistent.

“Not everyone who is feeling off needs an MRI, but no one knows your body like you do. Pay attention to it, and keep track of it. If you’re burping or have a distended abdomen, your body is trying to tell you something. See your doctor. Get a second opinion. Take note of your test results because they can give you a good indication that something isn’t right. Do what you need to do to compile some good information that you can share with your doctor. Doctors are amazing, but we need to give them our input to help them do their jobs.

“We are all in this together. There is an unbelievable community of support out there, and I encourage you to find what gives you strength. I also believe that prayer makes a difference, and I’m praying for all of you.”