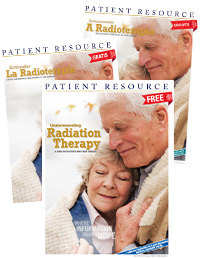 Radiation therapy is one of the most common treatments for cancer, with about half of all patients with cancer receiving some type of radiation therapy during the course of their treatment. The goal of this type of treatment is to destroy cancer cells and slow or stop tumor growth with limited or no impact on nearby healthy tissue.

Radiation therapy uses high-energy particles or waves, such as X-rays, electron beams or protons, to kill cancer cells and shrink tumors. These particles or waves damage the DNA, the molecules inside the cancer cells that carry genetic information and pass it from one generation to the next. Radiation therapy can either damage DNA directly or can create charged particles (free radicals) within the cells that can damage the DNA. Cancer cells with DNA that is damaged beyond repair stop dividing or die. Radiation therapy does not kill cancer cells immediately. The targeted cancer cells can take days or weeks before they start to die and will continue to die for weeks or months after therapy ends. As the cells die, they are broken down and eliminated by the body’s natural processes. Normal tissues have a greater capacity to repair this DNA damage.

Most types of radiation therapy are considered local treatments because the radiation is aimed at the tumor in a specific area of the body. Only cells in that area are affected. Most forms of radiation therapy can’t reach all parts of the body, which means they’re not helpful in treating cancer that has spread to distant areas. In some cases, most notably leukemia, total body radiation therapy may be given in preparation for bone marrow or stem cell transplantation.

Used alone or in combination with other treatments, such as surgery, chemotherapy or targeted systemic therapy, radiation therapy is typically used in the following ways:

Types of radiation therapy to treat some specific cancers*

Is radiation right for me?

Radiation therapy can be more beneficial for treating certain kinds of cancer than others. Different types are known to be more sensitive to the effects of radiation, and some tumors develop in areas that are easier to treat with radiation and will cause less damage to healthy tissue. When deciding if radiation therapy is right for you, you must weigh the potential benefits of treatment against the risks. If your treatment team has suggested radiation as a treatment option, it means they believe that the benefits are likely to outweigh the risks.

It is important to know that there are lifetime dose limits of radiation that you can have in any one specific area. There is an amount of radiation to normal tissue that is considered safe. If an area of your body has been previously treated with radiation, you may not be able to get radiation to that area a second time. However, even if one area of tissue has already been exposed to the maximum safe lifetime dose of radiation, you might still be able to get radiation to another area of the body if there is enough distance between the two areas. The safety of your dose is important when considering your treatment options throughout the entire course of your cancer care.

Talk to your medical team about the benefits and risks of receiving radiation therapy, and also ask about the potential outcome if you refuse treatment. Knowing as much as possible can help you to be sure that radiation therapy is the right decision for you.

Pain relief has many benefits beyond the obvious one of being more comfortable. Studies show that when people with cancer get their pain under control, they are much more likely to finish their treatment on schedule, be more active and enjoy better emotional well-being. Some evidence even suggests that survival is longer when pain is managed effectively. Palliative radiation therapy is effective for treating acute and chronic cancer-related pain that has not been relieved by other methods.

Cancer-related pain is caused by several different factors. In many cases it is directly related to the cancer itself and the location of the tumor(s). A growing tumor can press on internal organs, tissues and joints, creating pressure that ultimately leads to pain in that area. Pain also can be caused by cancer that has spread, or metastasized, to bone. This pain is typically felt in the back, pelvis and hips, as these bones are the most common sites of cancer metastasis. Cancer-related pain may be felt in parts of the body other than where the primary tumor is located, especially in advanced disease.

External-beam radiation therapy (EBRT) is the type of radiation most commonly used to treat pain from cancer that has spread. With EBRT, high-energy X-rays are used to deliver radiation from outside the body. Recent research has shown that this palliative treatment can be given over a shorter period of time than in the past. In some cases, only one treatment is required while in other cases 5 or 6 or 10 to 12 are needed. Another type of radiation therapy used for pain relief is internal, with radiation delivered directly to a tumor through either radioactive medications (known as radiopharmaceuticals) or small radioactive seeds. Radiopharmaceuticals travel through the body and target cancer that has spread to bone. Radioactive seeds are implanted in a tumor and are used more commonly as curative treatment.

Radiation therapy may cause a skin reaction in the area being treated. The skin may absorb small amounts of radiation, causing redness and irritation similar to that with a mild sunburn. These reactions are usually minor and will resolve on their own after treatment. Your doctor can prescribe a cream if the reaction is more severe. Other side effects may relate to the part of the body being treated.

If your pain isn’t being relieved, ask your medical team about exploring additional treatment options or for a referral to a pain specialist.