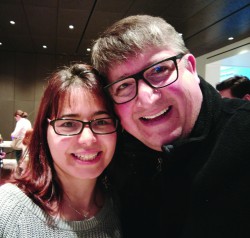 As a 20+ year survivor of testicular cancer, Eric Udler sees his experience as an opportunity to help other men. He can relate to being embarrassed about seeking treatment and anxious while going through it. As an eternal optimist, he uses humor and laughter to put others at ease. Today, he is cancer-free and is enjoying life with his wife and two children.

The first sign that something was wrong occurred when I was 26 and helping a friend move before Christmas. All of a sudden, it felt like the wind got knocked out of me. I tried to pick up a box and simply couldn’t. The next morning, one of my testicles was slightly enlarged, but I wasn’t too concerned. By Christmas, it was larger and seemed to be growing rapidly. My doctor referred me to an urologist, and after an ultrasound, he told me I had a tumor in one of my testicles that needed to be removed as soon as possible.

The surgeon removed the entire testicle. The biopsy results came back as malignant. I was diagnosed with Stage II nonseminoma testicular cancer that had spread to my lymph nodes and chest. I had a second surgery to remove the affected lymph nodes, and my doctor put me on a nine-week chemotherapy regimen. The treatment was one of the most difficult things I’ve ever gone through, but I survived and am now cancer-free.

When you go through something like cancer, you look at life differently. When I was diagnosed, I was a hard-charging sales guy and let nothing get in my way, but now I think about what is really important in life. I’ve become more spiritual since I’ve become a survivor. I believe in karma, seeing the glass as half full and doing unto others as you would have them do unto you. I look at the bigger picture now. I’m an eternal optimist.

I was a bit of a late bloomer in life. I didn’t marry until I was 39 and didn’t have children until I was 44. Now that I have two beautiful children and a wonderful wife, I have a new perspective about life. If I were to get cancer again, I wouldn’t hesitate to go through treatment so that I could be there for them. Before I had a family, I thought I’d never go through that again. So, your perspective about life can change as you live your life as a survivor. Now, I believe in the motto, “What doesn’t kill you makes you stronger.”

Having support was very important while I went through treatment, but groups were not for me. I went to one meeting, but I couldn’t connect with the people there. What helped most was talking to a friend who had actually been through testicular cancer. Having one person to talk to was the most helpful for me.

I tell others going through cancer to keep their friends and family close and to talk to other people who’ve gone through what you are. It’s important to hear what to expect from people who have "been there and done that", and it helps to stop the fear of the unknown. Doctors do their best to explain what’s happening, but they may not have experienced cancer on a personal level. Hearing it in layman’s terms from a first-person perspective is invaluable.

I’ve been able to use my experience to help other friends going through cancer. While I was in college, I was part of a close-knit group of fraternity brothers. Four of us ended up getting diagnosed with testicular cancer. I was the first. One was one of the precious few who died from it. That was so difficult — he left behind a loving wife and a two-year-old daughter. Our fraternity brothers created an annual golf tournament in his memory to raise money to help put his daughter through college. Although I hate golf and would rather watch paint dry, I participated every year to support my friend and his family. It brought all of us back together and was one huge party — the kind of party that he would have enjoyed.

I don’t fear cancer returning. I know I may get some other type of cancer eventually, but I don’t let it affect my daily life. I keep a positive attitude, which is just as important for a survivor as it is when going through treatment.

Although I kept my diagnosis very private while I underwent treatment, as a survivor, I’m now eager to help other men facing a similar situation. I am listed on some support groups for other men to contact about going through testicular cancer and living as a survivor. I’m very open to discussing my experience because it was so helpful for me to have that one-on-one support.

I tell men that if they suspect something is wrong “down there,” get checked out. Testicular cancer is very curable. You never want to take the chance that it is cancer and then wait to get it looked at. When caught early, testicular cancer can be cured. Men need to drop the machismo mindset and realize it’s worth asking your doctor about.

Although I had a testicle removed, I use humor and jokes to help others going through it and to put my friends and family at ease. I’ll use jokes like, “I’m taking my ball and going home,” or “You’re busting my ball.” You have to laugh your way through it all and live life to the fullest.