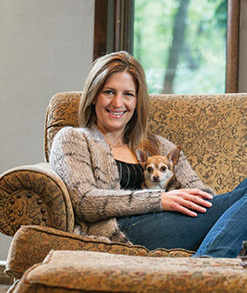 Anissa Norris, a business operations manager, had never had an abnormal Pap test when she was diagnosed with Stage II cervical cancer at the age of 36. Relying on the strength and support of her family and friends, she beat the disease and has been cancer-free for nearly eight years. Anissa and her husband, three children and their family also includes two dogs and one cat. When Anissa isn’t spending time with her family, she can likely be found cozied up with a good book.

Generally, birthdays come with gifts. My 36th birthday came with quite the opposite. It was on that day that I was diagnosed with Stage II cervical cancer.

About six months earlier, I’d begun experiencing heavy menstrual bleeding that continued to get worse. My gynecologist determined that it was likely a cervical fibroid and scheduled a surgery to remove it. During the procedure, my specimen was sent to a pathologist who immediately identified it as cancerous. When I woke up from the anesthesia, my doctor broke the news.

I was shocked. I’d never had an abnormal Pap test, which is generally the first indication of cancer. In fact, the test I’d had just five months prior to my diagnosis was completely normal. My gynecologist later told me that the area where the cancer was present had likely just not been swabbed. She explained that the tool used for the test is similar to a mascara wand and that, depending on an individual’s anatomy, it may not reach all areas.

My gynecologist referred me to a gynecological oncologist at a nearby hospital, and about a month after my diagnosis, I underwent a radical hysterectomy with total lymph node dissection. During the surgery, my doctor also lifted my small intestine out of my pelvic region with an omental sling and moved my ovaries under my hip bones to protect them from future radiation.

While my treatment time was relatively short, it still came with side effects. In addition to fatigue and nausea, I developed a small bowel obstruction, which my doctor attributed to radiation damage and/or scar tissue from surgery. So a year after my initial surgery, I had a second surgery in which a foot of my small intestine was removed. Abdominal pain due to partial and full blockages in my small intestine continued to plague me, and I eventually had a third surgery to remove scar tissue and clean up my abdominal cavity.

During that same time I was also diagnosed with celiac disease, which my doctor thinks was triggered by the physical stress caused by cancer and its treatment. While my side effects admittedly have been tough, I remind myself that surviving with side effects is better than not surviving at all.

Through everything, my husband was my rock. He was amazing. I also had family and friends who went over the top to help with meals, visits and house cleaning as well as child care and constant love. As a mom, it was incredibly reassuring to know that my children, who were 4, 7 and 10 at the time, were being cared for by loved ones. I simply could not have done it all without the love and support from those around me.

As time continues to pass, I continue to do better. I’ve also become a big advocate for the HPV immunization. Several doctors believe that cervical cancer would be largely eradicated if young people got the series of HPV shots. Although it was obviously too late for me, both of our teenage children – our son and daughter – have been immunized, and I encourage others to do the same. It’s amazing to me that if I’d received the immunization, I likely could have avoided all of this—my diagnosis, treatment and years of side effects.

My best advice is to always listen to your body and to be a strong self-advocate. Ask questions, and make sure that doctors hear what you’re saying and have a vested interest in your life. Above all, have faith. You really are stronger than you think.