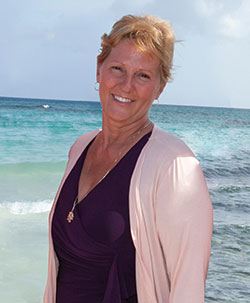 Roberta Majewski, a mother of three, had always wanted a big family. After their first child, she and husband, Mark, decided they’d wait until their oldest daughter was in school before trying for a second. When it was time, she visited her gynecologist for a checkup before trying to conceive. Little did she know, she was already pregnant — except the good news also came with bad news.

My gynecologist called to tell me I was already pregnant with our second child and that it was very early in the pregnancy. She also let me know to come in for further testing, including a biopsy, because of an abnormal Pap result. My excitement immediately turned to fear; I was only 26! I had a family history of gynecologic cancers, including my mother’s battle with uterine cancer, and I didn’t know what that would mean for me or the baby I was carrying.

I soon found out. My doctor called on a Friday afternoon to tell me I had Stage I cervical cancer. It was the worst possible way to receive a diagnosis: over the phone before a weekend. It felt insensitive, impersonal. After I cried for a long time, I decided I needed a new doctor and I’d do everything I could to save my baby and myself.

We went for a second opinion, and I was told I needed to have surgery right away to remove a large portion of my cervix. With this treatment path came the certain loss of our unborn child and the likelihood that I would not be able to have any more kids. That wasn’t an option if I could help it. My husband and I did some research and found a specialist in a nearby city. We wanted to find out if and how I would be able to safely carry my baby to term. He believed it was possible and helped me set up a plan that included regular monitoring – a monthly ultrasound and pelvic exam – to keep an eye on the cancer. In an effort to be as healthy as possible, I also started taking high-dose folic acid and vitamin B12. I’d read that low folic acid could contribute to cervical cancers, so with my doctor’s permission, I started the daily vitamin regimen.

It was terrifying to constantly think about the cancer growing just inches away from the baby. I was extremely anxious before every checkup and dreaded bad news. Fortunately, the cancer didn’t progress, and we delivered a beautiful, healthy baby girl nine months after my diagnosis.

Because the cancer had remained stable, my doctor decided I could heal naturally from the vaginal birth before having surgery. Three months later, I had a cone biopsy that cut away the cancer using the LEEP procedure. They were able to spare more tissue than they originally thought, but the surgeon told me that due to the scar tissue, it was unlikely I’d be able to conceive naturally again. It was hard news to hear, but with a brand new baby at home and a very excited 7-year-old big sister, I had a very good distraction.

My husband remained my biggest supporter and greatest strength. I’m proud to say that two years later, regardless of the odds, I gave birth to our son.

Even with my beautiful family to focus on, the thought of recurrence or a second cancer was forever on my mind. I stayed vigilant with checkups, and 17 years after my cervical cancer diagnosis, my gynecologist discovered benign tumors growing in my uterus and on one of my ovaries. Over the course of four weeks and several imaging tests, the tumors had tripled in size, so we decided on a complete hysterectomy at age 44.

My cancer journey taught me how much I truly appreciate life — my own and those of my children and family. I still get emotional when I think about my treatment options and how if I’d made any other decision, I would’ve lost my daughter and likely never had my son. The best thing I did for myself was research because knowledge is power. Know all of your options before you make a decision that will affect the rest of your life. A second opinion with a gynecologic oncologist, coupled with an understanding of what you’re facing, can make all the difference in the world.