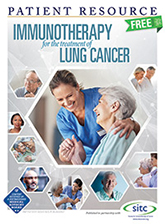 Learning you have lung cancer is life-changing. Give yourself time to digest the news, and then focus on learning as much as you can about your exact diagnosis. Knowing key information, including stage and any biomarkers, will better prepare you to make well-informed decisions with your doctor. If you’re unsure of your specific diagnosis, have your doctor or nurse navigator write it down for you, and be sure to ask about any medical terms you don’t understand.

Your lungs are a pair of large, spongy, expandable organs in your chest cavity that are surrounded by a thin layer of protective tissue (pleura). The right lung is a little larger with three parts (lobes), and the left lung has only two (see lung anatomy illustration below). When you inhale, your lungs absorb oxygen, which is then delivered to the rest of your body. When you exhale, your lungs rid the body of carbon dioxide. Your diaphragm helps your lungs expand and contract when you breathe.

Lung cancer often begins in the lining of the airways when abnormal cells grow out of control, dividing faster and living longer than normal cells. Over time, these cancerous cells accumulate to form a tissue mass (primary tumor). Left untreated, a primary tumor may grow into the pleura and form secondary tumors nearby. The cancer cells can eventually crowd out the normal cells to make breathing increasingly difficult.

In advanced disease, lung cancer cells may break away to form tumors in the opposite lung and distant sites such as the liver, brain or bones. These are known as metastases. Regardless of location, the metastases are still considered lung cancer and are treated as such.

Your doctor will analyze the cancer cells in a biopsy specimen or fluid taken from the lung or elsewhere to define the type of lung cancer, which will help guide treatment decisions.

Adenocarcinoma is the most common subtype diagnosed, especially in never smokers. It generally begins in the mucus-producing cells in the more distal (those that are farthest away) airways. Because it tends to grow more slowly than other types of lung cancer, adenocarcinoma is slightly more likely to be found before it spreads. Adenocarcinomas tend to develop in the peripheral lung and spread to distant sites more often than other types except for small cell lung cancer.

Squamous cell lung cancer (epidermoid carcinoma) is the second most common and starts in the early versions of squamous cells, the thin, flat cells that line the more central airways in the lungs. It most often develops in smokers and in the central lung. It spreads to distant sites less often than adenocarcinomas.

Large cell lung cancer can develop anywhere in the lungs and tends to grow and spread quickly. When it includes neuroendocrine features, it may behave and be treated like small cell lung cancer.

Adenocarcinoma and squamous cell and large cell lung cancers are sometimes collectively referred to as non-small cell lung cancer (NSCLC), which accounts for the majority of lung cancer diagnoses. Each type has distinct characteristics and responses to treatment, which makes it important for your doctor to determine the specific type.

Small cell lung cancer (SCLC) is an aggressive form of lung cancer that is defined as limited-stage (confined to one part of the chest, in just one part of the lung and in nearby lymph nodes) or extensive-stage (spread to other parts of the body, such as the bone, brain or other lung).

The ability to harness the potential of the immune system to fight cancer is giving new hope to people with lung cancer, improving patient outcomes and offering an enhanced quality of life. Sometimes referred to as biologic therapy or biotherapy, immunotherapy trains the immune system to respond to and attack cancer. This type of treatment is very different from conventional options, such as surgery, chemotherapy and radiation therapy, because it has the potential for a more lasting response that can extend beyond the end of treatment.

A primary function of the immune system is to determine which cells or substances are self or non-self. The immune system only makes enough white blood cells to fight non-self cells, also called antigens, present in the body. When the immune system is alerted to the threat of antigens, such as bacteria or viruses, it ramps up production of T-cells that attack and destroy the antigens. After an attack, the immune system must slow down so that the T-cells don’t begin attacking healthy cells. It does this through the use of checkpoints.

Checkpoints keep the immune system “in check.” This process happens between proteins and receptors at the cellular level. To understand how this occurs, it’s important to know that the surface of each cell is not completely round and smooth. Cells are covered with receptors and proteins, which work like puzzle pieces. Proteins have “tabs” that stick out, and receptors have “spaces” that curve inward. When the puzzle pieces fit together (known as binding), chemical signals and information are exchanged in a biochemical reaction; this process allows cells to communicate with each other. When the correct proteins and receptors connect, a series of signals is sent to the immune system to slow down once an immune response is finished.

Although cancer cells can be clever, the immune system has a long memory when it comes to battling dangerous cells. When your immune system encounters a virus, such as chickenpox, the memory T-cells check to see if that virus has any characteristics of cells they have attacked in the past. If so, your memory T-cells offer you immunity from that virus, and most of the time you don’t get chickenpox again. The memory T-cells alert the rest of the immune system, telling it to make more immune cells to attack the virus and keep you from getting the disease again. Memory T-cells stay alive and store this information for a long time, remaining effective long after treatment ends. Investigators believe that effective immunotherapy can result in cancer-specific memory cells that provide long-term protection against cancer.

Cancer is caused by mutations in your genes, which are pieces of DNA. Research has found several specific genetic mutations that lead to lung cancer. Doctors can test for these mutations as part of the diagnostic process by looking for biomarkers, which are the molecules produced by the cancer cells or other cells in the body in response to cancer. Testing for biomarkers is known as molecular testing. It may include testing for specific genes, proteins or molecules of the tumor and can be measured in the blood, plasma, urine, cerebrospinal fluid or other body fluids or tissues. Biomarkers are also known as tumor markers, molecular markers, biological markers or serum markers.

Most molecular testing for lung cancer looks for epidermal growth factor receptor (EGFR) mutations and anaplastic lymphoma kinase (ALK) fusions, for which several targeted therapies have been developed. Researchers have identified other biomarkers that are involved in some types of lung cancers. National guidelines currently recommend the following genes be tested if lung cancer is suspected: ALK, BRAF, EGFR, MET, ERBB2 (HER2), NTRK, RET and ROS1.

Next-generation sequencing (NGS) is used to test these genes. This technique is capable of processing multiple DNA sequences simultaneously with more speed and accuracy. NGS can be done on both tumor tissue and blood and, at present, can detect abnormalities associated with specific therapies.

To find out if you are a candidate for immunotherapy, your doctor may also look for the following factors along with molecular testing:

Researchers are not sure why this happens and more research is needed so immunotherapy is not given to someone who may not respond to it.