Speaking Out is TV Star’s Final Step in Healing 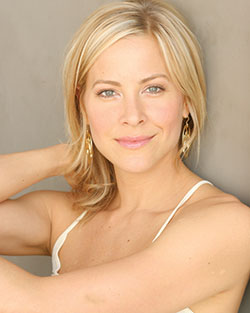 Brittany Daniel’s character Kelly Pitts, a former football wife and reality TV star, suddenly vanished from the set of “The Game” in 2011. Leaving fans puzzled, her character spiraled out of control and left to rediscover herself. When Kelly resurfaced, Brittany shared the real reason behind the character’s three-year disappearance. Just as Kelly needed time away, so did Brittany — to deal with a very private diagnosis of Stage IV non-Hodgkin lymphoma.

No longer quiet, she’s now speaking out. “I want people dealing with this disease to know that they’re not alone and that they absolutely can get through this,” she said.

Brittany suffered from lower back pain for several months. Finding no relief from her chiropractor, she was referred to an orthopedic surgeon who performed an MRI but found nothing. Even dramatic weight loss and night sweats were attributed to a severe case of the flu during peak flu season. By the time she went back to her doctor five months later, the pain had become so unbearable she was physically trembling.

“In the beginning, I’d told a friend that the pain I was experiencing was what I imagined cancer pain to feel like,” she said.

It turned out Brittany was misdiagnosed multiple times. Looking back, Brittany admits she should have pushed for more answers instead of telling herself she was fine and could handle the pain. “I learned it’s okay to ask for help and more importantly to slow down enough to listen to my body when it’s talking to me.”

When her doctor found the mass, he recommended further testing right away. A biopsy confirmed non-Hodgkin lymphoma had spread throughout her body.

Brittany had mixed feelings: relieved to finally have an answer to the excruciating pain but also completely stunned.

“I was in shock, but I also had moments where I went into warrior mode,” she said. “I just wanted to stop talking and get it taken care of.”

Shortly after her diagnosis, her twin sister, Cynthia, and her husband, Cole, asked her to move into their guest home with their mother, who cared for Brittany nonstop during treatment. Her private struggle became a family endeavor with incredible support from everyone, including her brother, who flew out to visit regularly.

One of the hardest adjustments for Brittany was letting go of her self-healing approach to treating illness. It was extremely difficult to give in to such an aggressive treatment, but she nevertheless surrendered to the doctors and underwent six cycles of combination chemotherapy over the course of six months. She lost her hair and some weight, plus suffered from nausea, vomiting, mouth sores and extreme fatigue. To help get through the experience, she watched a lot of “Seinfeld” and “Everybody Loves Raymond” with her mom.

“When you’re going through something heavy, laughing is like an escape,” she said. “It always made me feel better.”

One day Brittany was in the waiting room before one of her treatments and was sitting next to a young woman. The woman’s hair had grown back, and she appeared healthy and vibrant, like someone who had survived her cancer.

In that moment, the woman’s confidence gave Brittany an overwhelming sense of hope.

“I was at my lowest point; my hair was gone and I was so sick,” she said. “The confidence of this beautiful, healthy woman was such an amazing gift. I saw what I could be again and it made me want to fight through it.”

Another driving force behind her fight to live was her sister. Leaving her behind, Brittany said, would destroy her, and Brittany simply refused to do that.

Brittany’s treatment was successful, and less than a year after her diagnosis, her doctors told her she was cancer-free. After it was over, however, she went into a severe depression — something nobody warned her about. She had no idea her feelings were actually normal and often resulted from all of the hormone changes during treatment. She went to therapy, started meditation and tried acupuncture and yoga.

Brittany remains cancer-free and believes that the final step in healing is talking about it. She’s now working on speaking her truth, sharing her journey and being more honest with herself and others.

“How I felt during the depression, the fear and uncertainty, made me realize just how much we truly need one another as human beings.”

Brittany believes she was given an amazing opportunity to truly appreciate her life. She is now an Angel Ambassador for Gabrielle’s Angel Foundation for Cancer Research. “I want to be for someone what that young woman was for me – hope for the future.” Her advice: “Choose something you’re going to live for, and believe in it with all of your heart.”