Spreading the Word About Early Detection 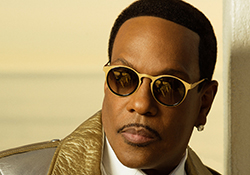 As many women often do with the men in their lives, Mahin Wilson urged her husband, Charlie, to add a prostate exam to his annual physical. That one checkup led the musician to learn that he had prostate cancer. Since his diagnosis and successful treatment, Charlie has taken on a new role in the public eye — that of an advocate for the early detection of prostate cancer.

Charlie Wilson, the R&B singer/songwriter/producer and former lead singer of The GAP Band, feels he is blessed. His prostate cancer was caught early, and he owes it all to his wife, Mahin.

“I wouldn’t have known if Mahin, the most wonderful woman in the world, hadn’t insisted I get a prostate exam during my yearly checkup,” he admitted.

After learning about his diagnosis, Charlie and Mahin did extensive research. They learned about the different types of treatments that were available for prostate cancer.

“After doing our research and getting second and third opinions, I decided the best option for me was to have brachytherapy. Radioactive seeds would be implanted in my prostate, and they would give off a certain amount of radiation that would kill the cancer. It would only require one surgery to insert the seeds because once they stopped giving off radiation, they would just stay in my prostate.”

Although it sounded simple enough, just hearing the word “cancer” was scary. Charlie was quite emotional prior to the surgery to implant the seeds.

“Everyone, including my doctor and his staff, did their best to keep my spirits up. In fact, during the surgery, the doctor played music. The song that was playing was “You Dropped the Bomb on Me.” It was one of my biggest hits with The GAP Band. Considering the circumstances, it was kind of funny, and it did make me laugh.

“Fortunately, I didn’t have any side effects from the treatment, but I couldn’t have gotten through the treatment and recovery without my wife and family, my manager, Michael, and his wife, Jenna, and what I lovingly call ‘Team Charlie.’ My fans were also supportive, sending prayers and thoughtful messages.”

Charlie never underestimates the value of having such a wonderful support system.

“I faced a similar challenge when I was recovering from my addiction to drugs and alcohol,” he said. “The family love and support was there for me during that time, too. I am proud to say I have been clean and sober for more than 20 years.”

Charlie’s career keeps him on the road all the time, but, after the surgery, he took about two weeks off to recover. And, when he went back to work, he had a new mindset.

“During our research, Mahin and I learned that prostate cancer is the second leading cause of death in men. African American men are 1.6 times more likely to get prostate cancer, and twice as likely to die. I wanted to use my platform to inform men about the importance of including a prostate exam in their yearly checkups. I was introduced to the Prostate Cancer Foundation in Los Angeles and worked with them directly for a few years. It was a great opportunity to spread the word. We did workshops around the country, which was an excellent way to share information.”

In addition to being a survivor himself, Charlie has a very important family connection to prostate cancer.

“My father was diagnosed with prostate cancer when he was about 70. Initially, he didn’t tell anyone. My dad was a preacher, and his primary goal in life was to spread the word of God. The treatment took so much of his energy, and I don’t believe he completed it. The cancer recurred when he was 87, and he passed away at 91.

“My brother, Robert, has also passed away,” he added, “but it wasn’t from prostate cancer. I am not sure if he had regular checkups, but I believe my other brother does.”

Charlie continues to talk about prostate cancer during press interviews and concerts. Realizing the important role women play in encouraging men to be aware of their prostate health, he also speaks to them.

“I ask the ladies in the audience to take the men in their lives to the doctor and insist that they have a prostate exam. Men aren't going to make that appointment, so we have to depend on our wives, girlfriends, sisters and daughters to take the lead.”

The response has been extremely positive with both men and women, and Charlie couldn’t be happier about it.

“I have had so many men come up to me and thank me for sharing my story. In fact, one guy came to one of my concerts and told me that he and a number of his friends went for prostate exams after hearing me talk about it on the radio. It turns out all of them had the disease in various stages. It means a lot to me to be able to help educate men about this disease.”