How One Diagnosis Shaped Two Lives 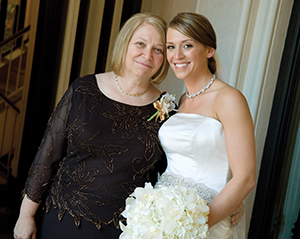 Alison Olig, 33, recently celebrated two joyous occasions: the birth of her second child and being cancer-free for 20 years. Alison, and her mom, Joan Darling, shared how Alison’s sarcoma diagnosis and the following 11 months of treatment shaped their futures.

“I was at a friend’s house when we found an odd-looking stress ball,” Alison said. “My friend’s mom said that her OB-GYN gave them to women so they could recognize a tumor. About a week later, I scratched an itch on my pelvis, and I felt something hard and pea-shaped below the skin. I promptly told my parents, ‘I just want you to know I have cancer.’”

“Obviously, we didn’t think she had cancer,” Joan said. “She was a young, competitive soccer player. But, she was also a pretty mature, level-headed 13-year-old, so we saw our pediatrician.”

“I told him the same thing,” Alison said. “He highly doubted I had cancer, thinking instead that it was a cyst. He said cysts were very common in girls my age, so he prescribed two rounds of antibiotics that did nothing. A few months went by. The cyst was growing, and it hurt when I sat down, so we scheduled outpatient surgery to remove it. When the surgeon opened me up, he realized it wasn’t a cyst. Instead of attempting to remove it, he took a biopsy and sent us home — without telling us his suspicions.”

Two days later, they got a call asking them to return.

“We didn’t expect big news, so just my mom and I went. When he told us I had a type of cancer called alveolar rhabdomyosarcoma, I had this overwhelming feeling that I needed to support my mom and be strong for her. I was weirdly relieved because I finally got an answer, and I told her everything would be okay.”

Children with cancer typically are treated in pediatric hospitals. Because there wasn’t a pediatric facility in their town, they were given a choice of hospitals in three cities.

“We learned that almost all children with cancer are treated in clinical trials,” Joan said, “but none were available. The next morning, we traveled for inpatient treatment. Alison had two days of tests, then they put in a port and began chemotherapy.”

From the beginning, Alison felt everything would be okay. Joan, however, didn’t believe the diagnosis.

“I was in denial,” Joan admitted. “We met with a pediatric oncologist (we didn’t even know they existed), and I insisted they mixed up her samples with someone else’s. I felt sure Alison was going to get chemotherapy unnecessarily, and some poor kid wasn’t going to get the treatment she needed. I finally gave in, and my husband and I began to research. We didn’t have the Internet then, so we went to the hospital library. The research we found was old, and it basically told us our daughter had a 10 percent chance of beating it. We both have Ph.D.s, so we understood just enough to be terrified. We eventually found updated research, which upped the chances to 50-50. That sounded worlds better to us.”

“The doctor told us that children with cancer are treated very aggressively,” Joan went on, “so Alison’s treatment began with a mix of three chemotherapy drugs. We had cycles of three weeks. She would have five days of chemo in the hospital, then we’d take her home. The next two weeks were not good. She had a lot of nausea, terrible mucositis that affected her ability to eat, and she lost her hair. Her white blood cell count dropped, and she battled infections, so I had to give her injections to get her white count back up to be ready for the next round of chemo. During the third week, if she felt up to it, she would see friends and do schoolwork. She was being home schooled and had to cram a year’s worth of work into the times she felt well enough to study.”

“On the nights before we had to go back to the hospital to start it all over again, I would throw a tantrum. I knew they’d make me go back,” Alison confessed, “but I just had to get it out.”

As difficult as the treatment was for Alison, it was hard in a different way for Joan.

“I worried about everything. I worried when things went well and when they didn’t. I worried when we had to stop the chemotherapy before we were supposed to. I learned, however, that if children make it through 75 percent of the suggested treatment, that’s considered a full dose because it is so intense."

After four rounds of chemo, scan results showed the tumor was almost gone, but the doctor cautioned them that the tumor would likely return. It was simply how Alison’s type of rhabdo worked.

Alison was at a pivotal age, teetering between a child and a young adult. Most of the time, she was included in those types of conversations.

“Sometimes they’d ask me to leave the room and that was frustrating. Some doctors thought I wasn’t mature enough to handle the truth. We had to remind them not to treat me like a child.”

“We never told her something that wasn’t the absolute truth,” Joan said. “But, making the types of medical decisions we had to for her, like agreeing to the aggressive protocol, was hard. We put a lot of thought into each decision, listing pros and cons and doing our research.”

When treatment was nearly over, Alison attended a week-long summer camp for pediatric oncology patients.

“The camp was free and open to all kids up to 18. Oncology nurses volunteered their time so kids undergoing treatment could attend between rounds. We returned year after year, even after treatment ended, and we formed incredible bonds. Many campers went back as camp counselors. I strongly encourage families of kids with cancer to look into this type of camp because it is an amazing experience.”

Alison finished treatment the week before ninth grade began, and she was determined to start high school with her friends. She had a rough start to the year. After school on the first day, she needed a platelet transfusion. Because her immune system was hit so hard and she was in a place filled with kids and germs, she got sick a lot. It was tough, but she was a bright, competitive student. Her teachers were supportive, often being creative with how she could keep up with her class work.

Her friends were wonderful as well. When she was diagnosed, they were shocked at first, but they still wanted to hear all about her diagnosis and understand what was happening. They kept her as involved socially as they could during treatment, but being back at school full-time brought with it unexpected challenges. Alison had changed emotionally in the past year, and she couldn’t bring herself to care about some of the things her friends did.

“While they were worrying if they were having good hair days,” Joan said, “Alison would worry if her hair would grow back.”

“My friends weren’t shallow, but they were — rightly — acting like typical ninth graders, while my priorities had changed. I wasn’t angry at them,” Alison explained. “I knew I just had to deal with it. I talked to some of my best friends about it, and I journaled a lot.”

She eventually got back into soccer, but nerve damage from the surgery kept her from running well. Joan recalled one club soccer game that still makes her chuckle.

“Most of the time, Alison wore a ball cap, but when she was around kids her age, she felt more comfortable in a wig. She had a custom hair prosthesis that was really wonderful. If people didn’t know her situation, they had no idea she was sick. During one soccer game, a girl on the other team grabbed her by the hair (which happens in soccer), and she pulled off Alison’s wig. The poor girl was terrified.”

Alison's optimistic outlook changed a little when treatment ended. She realized it was somewhat comforting to know that she was actively fighting cancer with treatment.

“I had slipped back into my old routine so easily, and I was afraid to get sick again and lose that. I was worried there were teeny cells in there that we’d missed. I had follow-up scans and, after five years passed without recurrence, I was considered cancer-free. I internalized that fear for a long time, and I still deal with it today. Even though I know realistically that every weird pain or lump doesn’t mean cancer, my head can still go to that worst-case scenario.”

Both Alison and Joan have channeled their valuable experiences into helping others.

Before she got sick, Alison planned to be a doctor. That changed during high school, when she became active in advocacy work. She also discovered the horrible nausea she felt during chemotherapy resurfaced every time she would set foot into a hospital.

“I had to change my life plan. Instead of going to medical school, I went to law school, where I became even more involved in volunteer work. I practiced law for a couple of years, during which I was asked to sit on the board for the Sarcoma Alliance, a nonprofit providing guidance, education and support to everyone affected by sarcoma. I knew that patient advocacy work was my true calling. When our Executive Director announced his retirement, I was able to unite my passion with my career and take on the role of Executive Director.”

Joan used her experience to give back, too. After Alison got sick, Joan joined a local cancer board. She has spent the last 15 years managing an email distribution list for families affected by rhabdomyosarcoma. She also served in many capacities as a patient advocate for families impacted by soft tissue sarcoma.

Today, as a wife and working mother of two, Alison still relies on the self-assurance and positivity that helped her 20 years ago.

“I don’t believe your outcome is determined by your attitude,” Alison explained, “but I do believe having the right mentality can help you face terrible things.”