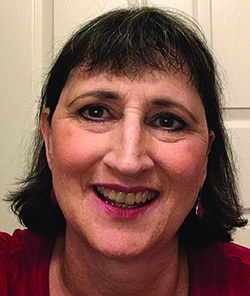 For the past 16 years, Suzie Siegel has managed leiomyosarcoma and the late effects of treatment, facing each challenge head on with the support of dear friends and skilled medical teams. She channels her energy into educating others and helping newly diagnosed patients cope.

Humor has gotten me through life, from poverty and crazy family dynamics to caring for family members and having a tough job as a journalist. I suffered from anxiety and depression before being diagnosed with a rare cancer called leiomyosarcoma. That didn’t help.

A gynecologist at my college health center saw what appeared to be a tiny cyst in my vagina. An ultrasound indicated it was benign. After I graduated with a master’s degree in women’s studies, I moved home to Texas to help care for my father, who had Alzheimer’s disease.

Within six months, I began bleeding between periods. A gynecologist thought my “cyst” was cancer. My student health insurance had run out, and I couldn’t get private insurance. The doctor suggested I wait six weeks for a biopsy, when my insurance in the Texas risk pool would start. I began bleeding a lot and had a foul odor. The tiny cancer grew to 12 centimeters and poked outside of my body. I’m one of the few people who has actually seen their tumor while it was still growing. My doctor told me to hold on.

I kept busy. I sold my father’s home; bought a new one in another city and moved in with my sister, her son, a St. Bernard and my father.

Finally, it came time for my biopsy. A pathologist who didn’t specialize in sarcoma thought I had carcinosarcoma. A gynecologic oncologist tried to prepare me for a life-changing radical hysterectomy, in which my uterus, ovaries and part of my vagina would be removed. I was 43. I still had plans for my vagina. Nevertheless, I do best in a crisis. I told the doctor: I’m ready NOW.

After surgery, I had a lot of pain and felt traumatized. But a nurse told me about her own hysterectomy. She was kind but firm as she encouraged me to get up and accept the rough road ahead. With a walker, I made my way to the gift shop to get a birthday card for my elderly roommate who was dying. Thinking about others can help you not think about yourself.

Two pathology reports were needed to confirm that my cancer was actually pleomorphic leiomyosarcoma, a soft-tissue sarcoma of smooth muscle.

My surgeon had tried, but failed, to get clear margins against my bladder. I had two options. He could remove my bladder or I could do pelvic radiation. I chose the latter, which caused severe diarrhea one week and constipation the next. As a sitz bath soothed my vaginal-anal area, a friend sat on the edge of the bathtub with his guitar, taking requests.

After radiation, I went to a large sarcoma center to get a second opinion from a medical oncologist. Within a few months, my cancer metastasized to my right lung. My medical oncologist and gynecologic oncologist agreed on a chemotherapy that was experimental for leiomyosarcoma.

I did it for a year, until the 1-centimeter metastasis disappeared. After my father passed, I returned to Florida, where I had a larger support system. My friends have been wonderful, and we share a wicked sense of humor about my health problems.

About a year and a half after my first lung met, I got another tiny one. My medical and thoracic oncologists recommended surgery, which I had.

In my original surgery, nerves to my bladder were cut inadvertently. For eight years, I had to catheterize myself to fully empty my bladder. Eventually I needed to wear a diaper, and I was prone to antibiotic-resistant infections. Because I hated to lose my bladder, I got opinions from five urologists. I even talked to a tarot-card reader. She was a retired nurse, and she persuaded me to get a urostomy.

Scar tissue from that surgery led to partial bowel obstructions. Once again, I had to wear a diaper because of incontinence. The nausea and vomiting got so bad that I was ready for hospice, but my doctor’s compassion convinced me to hold on. Finally, I had surgery to cut apart the adhesions. The obstructions returned a couple of years later, and he had to make a permanent colostomy for me.

Obstructions have come back again, as have resistant urinary tract infections. With each event, I focus on what I need to do next.

Contemplating the end of your existence is hard. Instead, I channel my anxiety into whether people like me and other pointless things. Some days I feel angry, frustrated and powerless. Telemarketers usually get the brunt of it.

I work almost every day on sarcoma advocacy. After my first surgery, I called a nonprofit that matched me with a peer-to-peer volunteer who had survived leiomyosarcoma. She greatly encouraged me. I then became a peer volunteer as well. I’ve used retirement savings to travel to cancer conferences. I tweet about sarcoma research and have more than 1,000 followers, and I write articles on sarcoma.

I encourage people who are newly diagnosed to see a sarcoma specialist, at least for a second opinion, and to learn about sarcoma from reliable sources. Being able to have a good conversation with your medical team is the first step to advocating for yourself.