Finding the Courage to Face Cancer with Humor 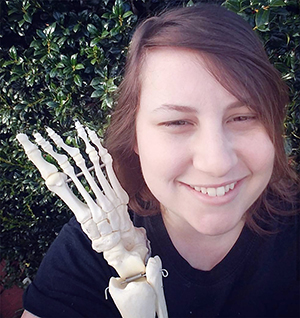 Kristi Loyall didn’t think a little tingling in her right pinky toe would lead to a diagnosis of cancer six years after it started. She certainly didn’t foresee having her foot amputated, nor did she realize she would become a social media sensation because of it. After being diagnosed with epithelioid sarcoma, an aggressive soft tissue cancer, she began using her amputated foot to bring awareness and humor to others who follow her online.

One day in 2011, I noticed that my right pinky toe was numb. For the next two years, the numbness spread to half of my right foot and it became painful. I asked my doctor about it, but he didn’t seem to be concerned. I was referred to a neurologist for neuropathy, which is a condition of the nervous system. However, the neurologist didn’t think I had neuropathy. He thought I had a B vitamin deficiency and recommended B-12 supplements. I saw the neurologist six times and he never thought my condition was more serious than a vitamin deficiency. I gave up going to him.

In the summer of 2015, I noticed a lump on the inside of my foot. I returned to my primary care physician in December 2015, and I was referred to a podiatrist. At first, the podiatrist thought the lump was caused by Tarsal Tunnel Syndrome. He ordered an MRI and X-rays of my foot. The podiatrist reviewed the results and said I had a lipoma, which is a noncancerous fatty tumor. He recommended I go back to the neurologist.

The neurologist then ordered blood work and asked me to return in a month. In the meantime, I had increasing pain and numbness in my foot. I was frustrated with the neurologist and felt like no one believed that I had a serious condition. I called my podiatrist back and expressed my frustration. He said I could try pain management with the options of steroid injections or surgery to remove the lipoma. I tried pain medications and the injections, but they only made the pain worse. In April 2016, I met with a surgeon to remove my lipoma. I had the surgery on April 11, 2016. Four days later, the results of the pathology on the lipoma came back. I was told the lipoma was cancer. I had a mix of emotions from disbelief to anger that this wasn’t found sooner. I was frustrated that no one had believed me and that I’d been living with this for years.

On my first visit with the oncologist, he wanted to confirm if the surgery had removed all of the cancer in my foot, so I had a PET scan. We discovered the cancer was throughout my whole foot but had not spread beyond my foot to lymph nodes or other organs. He recommended amputating the foot because my official diagnosis was grade 3 epithelioid sarcoma, which is a very aggressive cancer that is known to spread and recur frequently.

Although I didn’t seek a second opinion, my oncologist told me he had consulted with another doctor who was the only sarcoma specialist in the area. They reviewed my results and agreed that amputation was the best course of treatment for me because this type of cancer does not respond to chemotherapy or radiation therapy.

It all happened so fast. By April 22, I had the surgery to remove my right foot. After the surgery, I asked my doctor if I could have the foot back, mostly as a joke, but the more I thought about it, the more I decided I wanted it. The foot was sent to pathology for a month. By the end of May, they gave me my foot and part of my leg bone.

I couldn’t have gone through this without the support of my family and friends. After the amputation, I thought my life was over. But with the help and support around me, I realized there is hope. I can do anything I want now; it just takes a little work and planning. However, I still wonder if I made the right decision.

Once I decided not to let this situation keep me from living my life, I took a new path. I took pictures of my foot and put them on my Instagram account so that I could make my cousin and friends laugh. I really did not expect my friends to start sharing the photos with their friends and their friends’ friends. Before I knew it, my Instagram account had grown to more than 17,900 followers. My amputated foot was being shown around the Internet. To my surprise, the local news station called and asked to write a story about me.

I think my story can help others see that they can go through something and still keep a sense of humor and still live their lives. I recently adopted a new dog that is part Great Pyrenees and part Anatolian. I want to train him as a therapy dog and take him to children’s hospitals to show others you can survive after cancer. They can see my amputated foot and relate to me.

Don’t let cancer get you down. Find ways to keep smiling, laughing and living your life.