All Hands On Deck 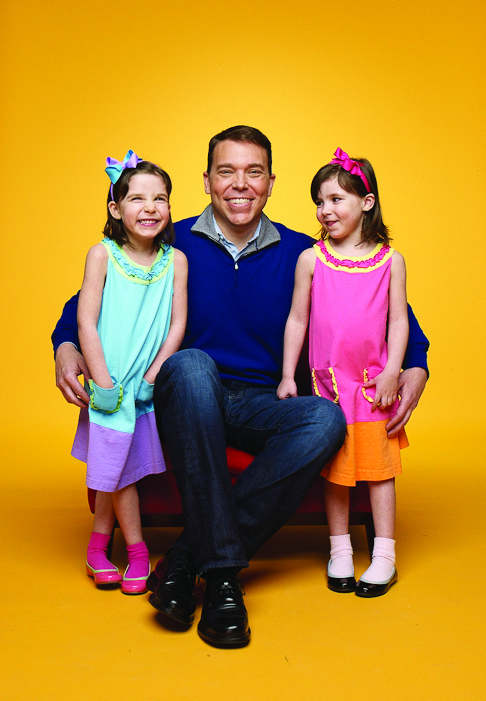 After learning of his sarcoma diagnosis at age 43, acclaimed writer Bruce Feiler took an unconventional and original approach: He created a “Council of Dads.” The Council consists of a group of men tapped to be dedicated, purposeful figures in his daughters’ lives. What followed was a best-selling book, a TED Talk, a television series and more. But before these successes, the idea was simply one father’s solution to a cancer diagnosis that left him fearful and helpless. Today, Bruce is cancer-free. He credits his recovery to an amazing medical team and the overwhelming support of his family, friends and, of course, the Council of Dads.

Bruce’s story of being diagnosed with a rare bone sarcoma in 2008 may have begun in 1969 — but not with a cancer diagnosis.

“I was five years old, riding my orange Schwinn bike around my Savannah, Ga., neighborhood when I was hit by a car and broke my left femur. Medically speaking, nothing interesting happened to me for another 35 years until a routine blood test showed I had an elevated alkaline phosphatase level.”

According to Bruce’s internist, that could mean a liver or bone issue. She ordered more tests, including a full-body bone scan.

“During the scan, the tech popped in when the machine was over my left thigh and asked if something had happened to my leg. I told him about my bike accident and assumed my bones just hadn’t healed correctly.”

Although that spot was indeed the problem area, the results of the scan led to something much more serious. In his left femur was a 7-inch, high-grade osteoblastic osteogenic sarcoma, a potentially life-threatening type of bone cancer that affects only about 800 people a year, most of whom are children.

“Was it a coincidence my tumor was there?” he wondered. “Regardless, before I had any information about a potential prognosis, my mind went straight to the worst possible scenario. I remember thinking three things very clearly:

“As a writer, having them know my voice was very important to me.”

Three days later, he came up with the Council of Dads.

“I’m not sure anyone sleeps right after receiving a cancer diagnosis. I didn’t,” he admitted, “and one sleepless morning, I had the idea of asking a group of my male friends to fill the dad space in our girls’ lives if I wasn’t around.”

Bruce felt his idea had always been in the world and he was just its caretaker. He shared his plan with his wife, Linda, unsure what her reaction might be.

“She loved the idea,” he said, “but she quickly started rejecting my nominees. Starting a Council of Dads was a great way to find out what my wife really thought of my friends.”

Bruce and Linda settled on friends based on their strengths — a travel dad, a baking dad, a dad to encourage them to follow their dreams, etc.

He then wrote a letter that he read aloud, in person, to each of the six men they selected, more or less inducting then into the Council. Linda called them “friend marriages.” When the first friend accepted, Bruce was a little taken aback.

“I had forgotten there was a question at the heart of the letter. It didn’t occur to me that people might turn me down.”

Bruce and Linda also needed help in other ways, beyond the Council. They decided to give friends and loved ones specific tasks.

“I learned immediately that I couldn’t deal with the illness all day, be a dad, and spend hours every night updating others, so I named my brother Minister of Information in charge of communication. On top of running her business, Linda dealt with the insurance company, which felt like a full-time job (she has the binder to prove it). Another person led the Casserole Club. Someone else made Halloween costumes, and so on. This structure not only helped us tremendously, it helped the friends and family members who wanted so badly to feel useful.”

The rest of Bruce’s medical story includes a long and intimate relationship with crutches, a skilled medical team he trusted implicitly, neoadjuvant chemotherapy to see how the tumor reacted, complicated and sophisticated surgery to remove the tumor, more chemotherapy to catch straggler cancer cells and years of physical therapy. Today, Bruce is cancer-free. He has a minor limp, some back issues and some lingering gastrointestinal problems, but he’s otherwise very fit and healthy.

“My advice is to start with a doctor you trust, even if it takes a second or third opinion. Next, ask for help. You’ll have so many things to do. My wife is a rock star, but it wouldn’t have been fair or smart to expect her to take it on alone. Our support system isn’t here just for the girls. It’s for all of us, and we need it.”