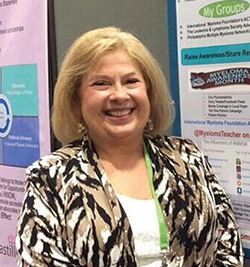 At 49 years old, Cindy Chmielewski did not fit the profile of a typical multiple myeloma patient. For two years, she struggled with debilitating back pain that doctors incorrectly diagnosed. Frustrated, she found a doctor willing to X-ray her spine. Additional tests confirmed she had Stage IIIA multiple myeloma. A retired school teacher, she now educates other multiple myeloma patients through social media, participates on Institutional Review Boards and speaks at multiple myeloma conferences around the country.

I experienced back pain that gradually worsened until it was debilitating. I’m not the kind of person who runs to a doctor for every ache and pain, but I took a friend’s suggestion to see an orthopedic doctor. My intuition told me to get an X-ray, but he didn’t order one. He diagnosed me and treated me for degenerative disc disease for two years with physical therapy and pain medication.

The pain was always there and became so overwhelming that I could no longer stand or go outside. I insisted on getting an X-ray, which showed several compression fractures in my spine. I had the option of having a kyphoplasty, but to be approved for surgery, blood work was required. I didn’t have a primary care physician at the time, so I went to a nearby clinic. The doctor said the test results showed severe anemia, which would delay the surgery until my anemia improved.

That doctor referred me to a hematologist. I didn’t know at the time that most hematologists are also hematological oncologists. The thought that I had cancer never crossed my mind. I just thought I had back troubles and anemia. Now I know that I had two of the four typical CRAB symptoms of multiple myeloma: fatigue and bone pain.

That fall, I started with the usual treatment at the time, which was a targeted therapy plus a steroid. My myeloma markers went down at first, but they started to plateau by the third month. By the fourth month, they started going up again. I stopped responding to the treatment.

Looking for other options, I met a myeloma specialist who suggested autologous stem cell transplantation. Although this was the most powerful treatment available at that time, the transplant had no effect. My numbers after the transplant were exactly the same as before, which was discouraging.

After both treatments were unsuccessful, my doctor offered three treatment options to consider: another stem cell transplant, a new targeted therapy or an older generation targeted therapy.

This was the turning point in my treatment. I decided to be more active in my health care and not just take my doctor’s word without question. I knew I had to become my own advocate, which required me to be more informed about multiple myeloma and its treatment options.

Ultimately, I weighed the requirements and time commitments of each option. I planned to continue working as a teacher, so I chose the older generation targeted therapy because it was an oral medication option, which didn’t require multiple trips to the doctor’s office each week. I didn’t think that would work with my teaching schedule. But, I decided to retire with the idea that if my retirement was not accepted by the school district that school year, I would be on an oral therapy and could physically continue going to work.

I retired and started taking the oral therapy in July. This therapy worked, but very slowly. Two years after my diagnosis, treating multiple myeloma with a three-drug combination became the new standard, so I switched to a combination that included two targeted therapies and a steroid. I responded slowly and steadily.

After three years of treatment, I was in partial remission. Ninety percent of the cancer was gone. Now, I am on a maintenance therapy. Fortunately, since I was diagnosed, more treatment options are available than ever before. I’m confident new medications will continue to be available to treat myeloma.

Throughout the whole process, I was supported by my husband, friends and support groups. Before I had the stem cell transplant, I shared my concerns with my family and friends and could see the horror in their faces. So, I decided to attend a support group of multiple myeloma survivors. Talking to people who understood what I was going through allayed a lot of my fears.

Now that I’m retired, I use my skills as a teacher to educate others about multiple myeloma by sharing information on social media, speaking at conferences around the country and participating on Institutional Review Boards. I feel it’s important to help others find the information and support they need.

If you are diagnosed with multiple myeloma, educate yourself about the type you have. It will help you know what questions to ask. Listen to your instincts. See a specialist that only treats myeloma. Find support, whether it’s family, friends, online support communities or in-person support groups. Maintain your social life. I recommend a vacation six months after having a stem cell transplant as a reward for getting through it and to have something to look forward to. And remember, life doesn’t revolve around cancer.