There is Always a Silver Lining 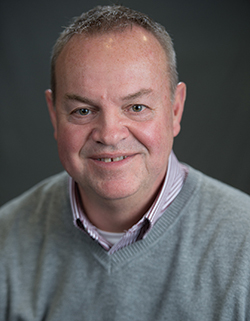 For Michael Riotto, a multiple myeloma diagnosis at 51 was certainly unexpected, but he refuses to let it control his life. His positivity, strong support system and fantastic medical team help him effectively manage the disease. Today, he enjoys life with his wife, daughter and son, and he is committed to helping others facing myeloma.

My multiple myeloma was discovered in 2011 purely by accident after a beautiful July day at the Jersey Shore with my 13-year-old son and his friends. We were body surfing, and I hit my neck on the beach. It hurt terribly. It still hurt the next day, so my family doctor sent me for an X-ray. A few hours later, he called to tell me that I fractured my neck. He said the emergency room was expecting me to get fitted for a neck collar. When I got there, they ran a CT and did bloodwork. That’s when I got the feeling something wasn’t right, so I texted my wife. She came to the ER to be with me. Around 10 p.m., the doctor told us that whatever I had, they weren’t capable of handling it and must transfer me to a medical center by ambulance. I didn’t think an ambulance was necessary, but they insisted.

When I arrived, I had another CT, MRI and more bloodwork. At 1:30 a.m., the neurosurgeon told me I had “moth-eaten bones.” The next morning, I had a bone marrow biopsy. That evening, he said he suspected myeloma. My wife and I had no idea what myeloma was, so a kind nurse brought in a few pamphlets for us. There had been no mention of blood cancer or cancer at all. Imagine our shock at reading that my life expectancy was five years.

The nurse scheduled an appointment with a hematologist for mid-August, and I was set to begin chemotherapy at my local hospital on Monday. It was induction therapy to prepare me for a stem cell transplant. I started the therapy and, about two weeks into it, sought a second opinion from an acquaintance at a leading cancer center. He confirmed that his team would follow the same protocol exactly, which made me feel comfortable with my treatment.

Even though I’d started the process, I wasn’t sure I wanted to have a stem cell transplant. I talked with a friend who’d been through one, and it gave him several years of remission. That was encouraging.

Our first meeting with my hematologist was at 5 p.m., but he was running behind. While we waited, he had food brought in for us. We got in with him at 7 p.m. At 8:30 p.m., his nurse practitioner reminded him that he had to catch a flight. When she reminded him again 30 minutes later, he handed her his credit card and asked her to please book him on the first flight out in the morning. At that point, I felt very confident with whatever he was going to recommend for me. Something that still impresses me is that he never talks about prognosis. If I ask, he says, “My job is to keep you alive, and your job is to live your life.”

My cells were harvested the first week of December. My doctor was ready to do the stem cell transplant, but I didn’t want to spend the holidays in the hospital. We compromised, and I checked in to the hospital the day after Christmas. On December 27, I had the high dose of chemotherapy and on December 29, I got my stem cells back. I celebrate that as my second birthday.

I spent 24 days in the hospital, and it was a little rough. After being released, I stayed at home until early April. During this time, we had tremendous support from friends. It was hard, but we finally accepted the help. It made our lives so much better.

I lost all the hair on my body – but not shaving for four months is a win – was nauseated and had awful diarrhea. The fatigue was the worst I ever experienced. I exercised and walked to relieve it. When that became too hard, my doctor encouraged me to swim. I wasn’t a swimmer before, and now I swim an hour or more daily.

It helps my fatigue tremendously. I learned early on to tell my medical team about every symptom or side effect. Sometimes it’s nothing, and other times they can do something to help me right away.

In April 2018, I had surgery to relieve intense pain in my spine due to arthritis, spinal stenosis and other issues. The surgery relieved 90 percent of my pain, and I can swim and walk again. I’m currently on a “drug holiday.” I only take medications to treat symptoms. I have bloodwork every six weeks. If I come out of remission, I’m open to any clinical trials my doctor recommends.

My wife comes to all of my appointments. We drive into the city, and we typically try a new restaurant. Making it a fun day takes the edge off. About once a year, our son and daughter go with us, and they get to ask my doctor all the questions. We’ve done it that way since the beginning. It makes them feel involved and informed.

Now I focus on advocacy and volunteerism, through which I’ve met amazing friends. I also mentor myeloma patients. I suggest they set daily and long-term goals. I made a goal to see our son graduate from high school. I accomplished that, and now I look forward to his college graduation.

Myeloma is just one of those things I have to deal with, so I choose to tackle it head on. Cancer does suck up a lot of time. I joke that keeping myself alive is my part-time job. When it comes to “glass half empty” or “glass half full,” my glass is always full. I can always find a silver lining.