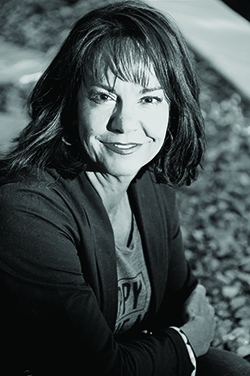 At 38 years old, Kathryn Moore didn’t fit the profile for someone with multiple myeloma, so it took some time for doctors to diagnose her illness. After determining multiple myeloma was the cause of her back pain and extreme fatigue, her doctor recommended a clinical trial that included medication along with a strict exercise regimen and specific nutrition guidelines. She followed the rigorous rules of the clinical trial for four and a half years before her disease went into remission. Still cancer-free after nearly 15 years, Kathryn credits her positive outcome to a healthy lifestyle.

It took four doctors roughly four months to diagnose my illness. My symptoms were pretty general. My back hurt and I was tired, which wasn’t too unusual considering I worked 75 hours a week in my family’s business. Doctors recommended more exercise, but I pushed to have blood tests. When the test results showed something that may be cancer-related, I was referred to an oncologist. The waiting was the most nerve-wracking part of it. When I found out I had multiple myeloma, I was a little relieved just to have an answer.

My mother had passed away from ovarian cancer five years before, so I was familiar with cancer in general, but I had never heard of multiple myeloma. My doctor recommended a standard chemotherapy protocol, and I had just started it when he found a clinical trial he wanted me to try. He felt the clinical trial was my best chance for survival. If I had continued the treatment I was on, I was projected to have maybe two years to live.

Before I was accepted into the confidential clinical trial, I had to agree to adhere to all aspects of it, but I felt like I was literally hanging on to the trial director’s leg begging to be let in. Fortunately, I made it in.

The clinical trial involved a three-pronged approach that focused on building up my body before we beat it down on the other end with an experimental drug. I went in for an initial meeting and baseline tests, and then it was like a boot camp experience at the clinic. All of the participants attended classes on nutrition and fitness awareness. We had to complete an hour of exercise every day (no matter how we felt) and follow an extensive nutritional program that included eating 4,000 calories a day. We were given a list of specific foods we had to eat each week, along with a list of things we couldn’t eat at all. I didn’t live an unhealthy lifestyle before, but the diet portion was fairly restrictive. We had to completely change our lifestyles. When you are 60 to 70 years old (which is the typical age of multiple myeloma patients), that can be hard. A couple of people dropped out after they attended the nutrition class.

One of the many miracles in my life is that I lived around the corner from the clinic where this trial was based. It was a good thing, too, because for more than four years, I was at that clinic six days out of every 11 for the medication part of the trial — chemotherapy infusion one day followed by five days of oral chemotherapy.

I had some problems sleeping and weight fluctuations, but I fared better than most in the trial. I kept my situation pretty quiet, but my sister really helped me get through it. The most important thing I did was to have a positive mental attitude. I think I’m really funny and I’ve always tried to find humor in all that I experienced.

I worked throughout most of the clinical trial, but my job was stressful. For my health, I decided to leave our family business and take a different role. My stress level was reduced significantly. Nine months later, I was in remission, and I was able to stop the clinical trial after four and a half years.

Having the chance to be in a clinical trial saved my life. Four years after I left the trial, I learned it was being closed. It was deemed successful, and the treatment had become mainstream. Along with the day I went into remission, it was one of the most significant moments of my life — just knowing that other people will be well and I helped that to become a reality.

Since I stopped the clinical trial, I have not relapsed, and I don’t take any type of maintenance therapy. I occasionally have to get blood transfusions. I listen to my body and, when my energy level gets low and I notice my ability to concentrate and sleep suffers, that usually signals that I need to have one.

I still follow the lifestyle the clinical trial demanded, just not quite as rigorously. It’s how I live now. My life is very different than it was before I was diagnosed. I consider myself the luckiest girl on the planet. I keep my stress on a completely different level. I volunteer. I work on small work projects. I help my terrific dad who, oddly enough, was recently diagnosed with smoldering myeloma, even though there is no genetic link.

I still pray. I hug my dog a lot. I hug my dad a lot. That’s what I do for stress reduction. And, I recently made a major life change. At 56, I’ve just finished my first year of veterinary school. I don’t have a focus yet. I’m trying a little bit of everything to see what I like. That can be stressful, too, but it’s a good stress. And why not try something I’ve been dreaming about since I was nine years old?

*"Kathryn Moore" is a pseudonym which Patient Resource is using to comply with this survivor’s request that her real name not be used.