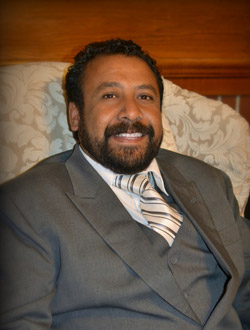 In 2007, Rogelio Romero went from working the hardest job he had ever had to fighting the toughest battle he had ever faced. Employed at the time as a chicken catcher, Rogelio was familiar with aches and pains from bending, lifting and moving quickly at a Tyson Foods plant. But when his lower back pain became too much to bear, he visited a doctor. First, he was diagnosed with a pulled muscle, and then the doctor thought it was a kidney stone. After that, Rogelio was treated for what his doctor thought was a fungal infection in his lungs. But the journey for the Arkansas resident was just beginning.

It took them three months to find out my symptoms were actually caused by multiple myeloma. I was diagnosed in September, and I started chemotherapy just two months later in November. I don’t remember my doctor ever specifying my stage of cancer during the diagnosis, although some information may have been lost in translation because English is my second language.

At first, the doctor was more worried about me being paralyzed than he was worried about my cancer. I feel like I’m pretty lucky that I’m still walking because of the pain in my lower back.

I was initially treated with chemotherapy before undergoing two vertebroplasty surgeries, where doctors inject a liquid cement-like material that hardens rapidly through a hollow needle into the affected vertebrae.

After that, I also received two autologous stem cell transplants, using my own stem cells. The doctors were able to move stem cells from my bone marrow into my blood stream for collection before high-dose chemotherapy. My blood was drawn and then run through a machine that separates out the stem cells before returning the blood to me. The stem cells are then frozen. After the chemotherapy, the thawed stem cells were returned to my blood in a process similar to a transfusion. Then they made their way to the bone marrow to help produce healthy new blood cells.

For the most part, the procedures have been successful, although I have experienced ups and downs during the process. For instance, about eight months ago, I developed shingles, which affected my sciatic nerve.

It was so unreal how much pain the shingles caused. It was physically and emotionally taxing because I couldn’t sleep. Through time, you learn how to deal with the pain at some level. Personally, I tried to stay calm and relaxed and positive. The extreme physical pain forced me to focus on and deal with my emotional pain.

A lot of times, we don’t want to deal with physical, emotional or spiritual pain, because we don’t know that it helps us to grow as human beings. But it teaches us how to decide among one thing or another or to better compare one situation from another.

My friends and family have also helped me heal, especially my 11-year-old daughter. It was hard for me to let her know that I had cancer because she was so young at the time. I knew it would break her heart, but by dealing with this, she’s been forced to learn and mature. She’s been a great support to my life.

I encouraged her to write a book about our experience. I told her, “You need to share your story with others because you would be surprised how many people you can help by sharing your feelings and your story. It can touch a lot of hearts and be helpful for a lot of people.” Be honest, be real and tell the truth. That’s the best way to write.

The most important thing I’ve learned is to enjoy life as much as you can. When you have cancer, you automatically switch to a new level of your life. You see things differently than you did before you were diagnosed. I try to appreciate everything, I try to be conscious about what’s going on around me, and I try to put what I learn into practice.