Opening A New Chapter In Her Life 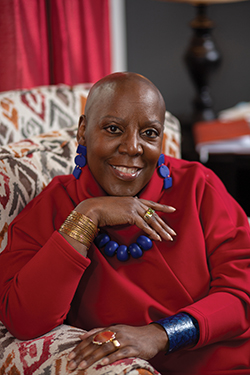 As a traveling performer and poet, Glenis Redmond spent most of 2019 on the road. When something felt “off,” she listened to her intuition and saw her doctor. Many tests later, she was diagnosed with Stage III multiple myeloma. Today, her myeloma is undetectable and she’s enjoying life with her mother, twin daughters and grandson.

Traveling nationally and internationally to teach, read and perform poetry is my passion. I travel so much I’ve earned the title “Road Warrior Poet.” So when I began feeling off physically, I went to my doctor. He wasn’t concerned and that didn’t sit well with me. I was due for a physical in four months and could have waited, but instead I advocated for myself and found a nurse practitioner who listened to me.

The nurse practitioner ordered blood tests. She called two days later to say the results indicated kidney disease and anemia. She felt I needed more testing, but I was out of town attending a writing residency for three weeks. She was able to find a medical center in the area where I could have my blood and urine tested. After the third week, I logged on to my patient portal to review the latest round of results and saw a bunch of words I didn’t recognize, such as M-spike and monoclonal something. I copied and pasted the information into an internet search, and the only thing that came up was multiple myeloma. I knew right then that’s what I had.

I didn’t tell anyone what I’d found and instead waited to hear from the nurse practitioner. On June 27, 2019, she confirmed what I already knew. I had multiple myeloma. She referred me to an oncologist, and after the Fourth of July, I had X-rays and a bone marrow biopsy. The imaging found lytic lesions on my skull, clavicle and femur but no breaks or fractures. My disease was considered Stage III.

My oncologist felt I was the perfect candidate for an autologous stem cell transplant, and I got a second opinion to confirm it. Then, every Monday for seven months, I received an infusion of an immunomodulator, targeted therapy and a steroid. My 83-year-old mother took me to every appointment. I stopped traveling about six months before the transplant to prepare for it.

With the infusions, I didn’t lose my hair, but I knew I would with the high-dose chemotherapy. My twin daughters and I made a ceremony around it and cut the dreadlocks that I’d been growing for 20 years.

I began high-dose chemotherapy on January 27 with two doses intravenously, and the transplant started January 28. I was hospitalized for about three and a half weeks. This process was the hardest thing I’ve ever done. Before going into the hospital, I was unsettled at facing the unknown and the possibility of not surviving the transplant. The physical impact of the chemotherapy was challenging, too, because of the nausea and diarrhea. It took some time to gain back my mental and emotional capacity. The drugs put me in a dream state, but in April, the two months that I lost began to come back.

While I was in the hospital recovering from the transplant, I was nominated for The Governor’s Award along with five other people. It is the highest award in the State of South Carolina for the Arts. This outpouring of support helped me through the stem cell transplant.

The transplant was a success, and the cancer is now undetectable. I continue to take the immunomodulator, which I’ll be on the rest of my life. It’s caused neuropathy in my feet, ankles and thumbs. I also have nausea and no appetite, so my nurse practitioner arranged for me to see a dietitian to help improve my nutrition.

For four months after I was diagnosed, I was in shock. It wasn’t until about three and a half months after diagnosis that I finally was able to cry. I had to grieve the loss of the life I had imagined before multiple myeloma. I’m still letting go, but now I’m focused on seeing what the next chapter of my life brings.

To get through the emotionally challenging times, I keep what I call a catalog of beauty. I journal, write poetry and list all the things that bring me joy. My saving grace is journaling.

Remember to experience life. My five-year old grandson reminds me of this every time I see him. When he hears music on a children’s show, he runs over and asks if I want to dance with him. He is my dance partner, so we dance! My advice is to find a health care team that you feel cares about you. I love my care team including my doctors, pain management specialists, etc. I believe they truly care about me, not just my illness. If you don’t feel you are a good match with your doctor, find a different one. Listen to your intuition. Don’t dismiss your feelings.

Allow yourself to mourn the life you had before. Lead with your humanity, not your illness. You can make beauty out of pain if you want to grow. And, if someone asks you to dance, forget about your pain and worry — dance.