Educate yourself, find a specialist, and partner with your doctor 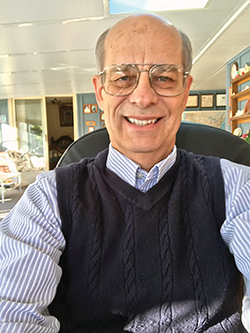 Dr. Jim Omel struggled with increasing back pain for months until the night he felt something move in his back followed by sharp pain. Testing revealed he had multiple myeloma. Despite the shock of the diagnosis and prognosis, he was determined to treat it aggressively. As an advocate for people with multiple myeloma, he leads a support group and urges people to educate themselves because knowledge is power.

My symptoms started slowly as increasing back pain, which I attributed to muscle strain due to improperly lifting my wife with multiple sclerosis into bed every night. As a family physician, I managed my symptoms with a non-steroidal anti-inflammatory drug, heating pad and exercise — the same recommendations I often gave to my patients. But the pain continued and worsened for nine months.

Everything changed the night before Thanksgiving. While doing my nightly sit-ups, I felt my back shift and felt a sharp pain. I knew then that something was seriously wrong. The next day I had an MRI and blood tests. Imaging showed I had bone fragments where my tenth thoracic vertebra should be. Taken together, the results indicated I likely had multiple myeloma, and a needle biopsy confirmed it.

I was in complete shock and felt devastated. It was difficult telling my family. In my 25 years of practice, I had only seen two patients with multiple myeloma and they had done very poorly. I resolved to go through treatment with chemotherapy and radiation therapy, which were the primary treatments in 1997, and I hoped to reduce the severe pain.

A full course of radiation to my tenth thoracic vertebra caused my back pain to melt away, and by the time I was finished, I was pain-free. Next, I began a standard-of-care chemotherapy regimen that was common in the 1990s. These treatments reduced my M-protein, and symptoms disappeared for two years, but I did lose some height.

In 2000, my M-protein level started to increase. Thinking it may be a false positive test, I waited to see what the next two blood test results would show. The increase continued and confirmed the multiple myeloma was coming back.

To determine what to do next, I traveled to another state for a second evaluation. Those doctors recommended two transplants, but I returned to my home state and received a single autologous stem cell transplant in 2000. I began taking a bisphosphonate to help protect my bones and then retired from my medical practice. I hoped the transplant would get me two to three years of retirement, but it was so successful that it enabled me to obtain complete remission for five years.

I took the bisphosphonate for six years, but as a result, I developed osteonecrosis of the jaw and had an exposed jaw for 14 months while it healed. Today, bisphosphonates aren’t typically taken for so long to avoid that type of side effect.

In 2006, pain returned and new scans showed multiple spots on my ribs, ileum and clavicle. I received more radiation therapy and took a targeted therapy with a steroid. This treatment gave me three more years of remission.

In 2010, pain in my ribs returned, and a PET/CT scan confirmed the multiple myeloma was back. I resumed radiation therapy, a targeted therapy and a steroid, which put me back into remission. Since then, I’ve been free of symptoms, am not taking any drugs, and the disease has not returned. I monitor my labs every three to four months, and watch for signs of pain to return.

I want to use my experience as a doctor and a patient to help support others with this disease. First, make sure to find a multiple myeloma specialist as soon as possible after you are diagnosed. A specialist will have access to up-to-date information and has experience in treating this type of cancer. You really need a specialist in your corner.

Not long after being diagnosed, I started a monthly support group for people with multiple myeloma. I encourage anyone with this disease to educate themselves. The more you know, the better decision-making power you have. Start with your doctor, who is your educator and teacher, but recognize that you have to make the decisions. Consider seeking out other knowledgeable patients who can also offer information.

While learning about your cancer, give it the time it deserves. It’s now a part of your life. Seek information from reliable and reputable sources. If you don’t know where to look, ask your doctor.

Despite being given only three years to live, a funny thing happened along the way ... I lived. I realize this disease will not go away, but it is manageable, and I have hope that there will be a cure. When I was diagnosed in 1997, there were very few treatments available, and the prognosis was poor. That changed dramatically after 2015. More options are available now, and many people are living with it as a chronic disease like diabetes. More exciting treatments are coming, such as immunotherapy that may offer more longevity, and four-drug regimens.

Research is painting a brighter outlook for multiple myeloma patients each year. Don’t lose hope, and please be optimistic. We can beat it.