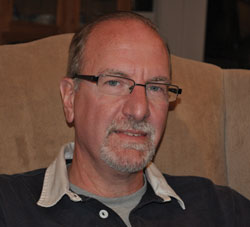 Doug Rofrano is a long-term survivor of non-small cell lung adenocarcinoma. He was diagnosed in 2000 at the age of 44, but fortunately, it was caught early — especially important because his mother, father and brother have all battled cancer diagnoses.

Doug and his wife, Michele, live in Connecticut, with their dog and cats. He has spent his career in insurance, and Michele is an artist. They stay fit by hiking and walking. Doug also plays the bodhrán, a traditional Irish drum, and perviously volunteered for the Bloch Cancer Hotline.

For anyone who has just been diagnosed with lung cancer and is searching the internet looking at the statistics...stop! I did all that, reviewed the studies and tried to discover what my survival rates were. It made me nuts. I finally realized that those numbers didn’t have any real meaning for me. The only statistic that matters is you.

So one of the first things I did after I received the news was talk with my mother. At that time, she had been a survivor of her first diagnosis for more than 31 years and the second for six. She told me to keep focused on living, plan for the future and stay positive. She said she never believed that she was going to die of cancer. She was convinced that something other than cancer would kill her. And she was right. She died in 2011 just short of her 89th birthday — from heart failure.

My diagnosis was something of a fluke. I went for my routine checkup for work and was feeling great. I had no symptoms, had quit smoking 13 years prior and thought I was perfectly healthy. I was cycling 100 miles a week. During the appointment, the nurse asked if I wanted to have a chest X-ray. My company didn’t pay for it, and at first, I said no. Then for some reason, I changed my mind. I always say that my father was with me that day.

On the X-ray, the radiologist saw something he didn’t like and wanted a follow-up CT scan. I kept telling the doctors it was nothing. The scans and bronchoscopy indicated otherwise. Eventually, they saw a “single pulmonary nodule” but were not yet positive it was cancer. When it doubled in size between checkups, the pulmonologist recommended surgery.

The surgeon found adenocarcinoma, but it was contained, and they thought they had removed it all. The oncologist, however, gave me the option of chemotherapy for follow-up. This was a fairly lengthy decision for me. I was recovering from surgery, and I went for second and third opinions. After these consultations, I decided it was better to be safe than sorry and pursued the treatment.

Two months after my surgery, I began the chemotherapy. Every three weeks from May to July, I was infused with chemotherapy and a number of other drugs to help counteract the chemo’s side effects. It felt like I had the flu, but I never threw up. I even began exercising again during treatment, which helped with the nausea.

I had a few long-term side effects that included bone pain, diarrhea and numbness in my hands and feet. I also lost my hair. After about a year, most of the side effects were gone. As I continued to cycle, my lung capacity was eventually above normal for men my age.

When I was finished with the chemotherapy, my reaction was, “What do you mean I’m finished?” I wanted to do more, just in case. My team told me they would monitor me regularly, but it was hard to accept that this was all I needed to do.

In general, I tend to be pessimistic and cynical, but I quickly learned how important a positive attitude was in response to treatment. I have come to believe that a big part of the battle is in your head. Not only was my mother supportive, but my wife was another big positive in my life. She told me to worry about getting well and she would take care of everything else. She never doubted my survival.

I urge people to have the routine chest X-rays, be positive about treatment, get second and third opinions and with your doctor’s guidance, be as aggressive as you can with your treatment. You have nothing to lose. The net of my experience was surprisingly positive, and while it was difficult at the time, I learned that it wasn’t the end, just a bump in the road.