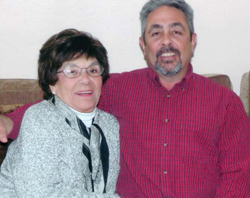 Jennie Metz was 84 when she was diagnosed in 2008 with stage III non-small cell lung (NSCLC) cancer. Fortunately for Jennie, she was eligible for a personalized targeted treatment that slows or blocks the activity of a protein, epidermal growth factor receptor (EGFR), which cancer cells require to grow. She also participated in a clinical study that resulted in its additional approval as a maintenance therapy.

Jennie is an active octogenarian and has a very close family that includes her married daughter and son (pictured), four grandsons and one great-granddaughter. She and her husband, Howard, were married for 52 years when he died in 1998. Jennie was a homemaker and a small business manager, and even bought a business when she was in her late 60s and ran it for 10 years.

It’s very strange, but I rarely think about my having cancer. I just don’t give it much thought, and I think that benefits me because it does not dominate my life. When I meet people, I don’t tell them I have cancer, because that isn’t what makes me who I am.

I also had so much faith in my oncologist’s advice that it never crossed my mind that the medicine he prescribed wouldn’t work. When you are diagnosed with cancer, it is very important to have a doctor in whom you have complete trust. I was 84 when I was diagnosed, but my oncologist still treated me as a vital person who had a lot more living to do.

I couldn’t really believe it when I was told I had lung cancer. It had been 40 years since I had smoked, and I was in good health. When I was young, everyone smoked — even the doctors smoked. But in 1968, when I had a cough and wasn’t feeling well, I went for a checkup, and my doctor took a chest X-ray. He then frightened me by telling me, “If you don’t quit smoking, you are not going to live to raise your children.” That certainly got my attention. I was really addicted, but I took those cigarettes and threw them away in his office. It was very, very hard to quit, but I never regretted it.

In November 2008, I was feeling a bit short of breath, and my son, who is a retired captain in the fire department and a paramedic, insisted that I go see the doctor. I went to see my regular doctor and he ordered a CT scan for me. They found fluid in my lung and had to insert a tube to drain it. The draining was an ordeal — and then the cancer was found. My doctor was so concerned that it was hard for him to tell me.

Thankfully, I was referred to one of the best oncologists in the country, who happens to live in the city where my son resides. We arranged a meeting with this specialist, and my entire family — my two kids, their spouses, and four grandsons — were all there.

During the conversation the doctor told me that I had Stage III non-small cell lung cancer. I don’t remember a whole lot after that. I thought, “This just can’t be. I don’t feel badly.” Fortunately, my family asked all the right questions — and we wanted to get started with the treatment immediately.

My oncologist and I have a great relationship. I believe he thought, “This old gal has a lot of spunk.” I transferred to the hospital in the city where he practices regularly. He ran tests and verified that I met the criteria to be a part of the targeted medicine treatment program. I began the four chemotherapy treatments and was fortunate because I was never sick. I didn’t lose my hair, but it thinned a bit.

When I completed the chemotherapy, I began taking the targeted therapy. It was just one pill every day. Initially, I had a number of side effects: nervousness, shakiness and diarrhea. I was also tired, but of course, I was 84 years old! My doctor then reduced my dosage and things improved greatly. I hardly knew I was on the medication.

I will continue to take the targeted therapy once a day for the rest of my life. The cancer has shrunk, the medication is very simple and I feel great almost every day. I am religious and I believe my healing is a miracle of modern medicine and God’s help. I think it’s also very important to have a positive attitude and to keep your family and friends close to you if you can. The last time I saw my oncologist, he said I was in remission, so I’m living a pretty good life at this point.