She Took Control, and Her Persistence Paid Off 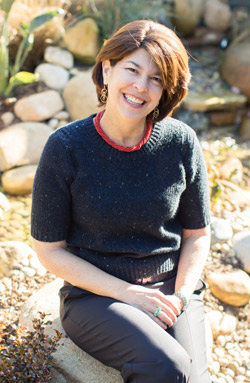 Elizabeth Lacasia worked for a biotech company as an oncology product strategist before she herself was diagnosed with non-small cell adenocarcinoma in 2007. She and her husband were married two years before her diagnosis, and they live in a house they recently designed and built together. Elizabeth enjoys gardening, traveling and creative writing, and through persistent self-advocacy at every step, she has learned to come to terms with her Stage IV lung cancer.

It was at a Christmas sing-along in 2005 where I first noticed my breathing didn’t seem quite right. Later on I developed a persistent cough, so I made an appointment to see my doctor. Because I was a healthy nonsmoker in my 40s, he said it was just allergies or acid reflux and prescribed an allergy medication. But my cough didn’t go away. I saw several other general practitioners throughout the year, during which time my cough progressed to the point where I was coughing up fluid.

In late 2006 I finally had a more comprehensive workup, which included a chest X-ray and a CT scan that revealed several tumors in my lower left lung. The largest was about the size of a pingpong ball. I was diagnosed with non-small cell adenocarcinoma. More specifically, my subtype was invasive adenocarcinoma (formerly called bronchioloalveolar carcinoma) - a very rare, slow-growing and difficult-to-treat lung cancer. I immediately had a lower left lobectomy, after which my surgeon told me I was cured. Unfortunately, about a year later a wedge resection verified that the cancer had returned and spread throughout my lungs.

Several weeks after my surgery, I began treatment as part of a clinical trial, including eight cycles of three types of chemotherapy. I then continued on one of them as a maintenance therapy.

In 2008, I pursued a second opinion from another thoracic oncologist, as lung cancer is an especially complex disease and treatment philosophies differ. It was the best decision I ever made. My new oncologist told me about and conducted molecular genetic testing on my tumor tissue. This panel of simultaneous tests produced a profile of my unique disease, including the chemotherapies and targeted therapies that might be effective. We discovered my cancer was resistant to the most toxic chemotherapy included in my initial treatment regimen. If we had conducted this testing panel beforehand, the combination of drugs would have been different, and I might have had a greater and longer initial response.

Using this information when my cancer progressed in 2009, my oncologist suggested that I participate in another clinical trial, which combined a targeted therapy and chemotherapy in a way that could help short-circuit disease mutation. I then took only the targeted therapy as a single agent. I’m stable, and no active disease is apparent on my periodic CT scans. My oncologist says I’ll be on chemotherapy for the rest of my life, as I still have active disease, but my treatment regimen has been quite a success!

I have some side effects, including fatigue, intestinal issues and extremely dry skin. But in the grand scheme of things, these are all minor concerns. A B12 shot helps with my fatigue, probiotics and fiber help modulate my intestinal issues and nail conditioners and body lotions help address my skin concerns. I also now suffer from asthma and mild COPD, but I have a supportive pulmonologist who – in addition to my oncologist and general practitioner – helps optimize my overall quality of life.

When I was first diagnosed, I was frightened. But by learning about my options, becoming involved with the Bonnie J. Addario Lung Cancer Foundation and participating in the Writing through Cancer program, I’ve learned to confront my fears and find peace, as there’s renewed hope for people with lung cancer. Now that I’m a veteran of this disease, I try to be for others the person I wish I’d had when I was diagnosed—a relatable and helpful resource.

This is your body and your life. I firmly believe that if I hadn’t been such a strong self-advocate – both in getting my initial diagnosis and in eventually switching to an oncologist whose philosophy aligned with my own – that I might not be here today. In fighting cancer, you can’t be passive. You have to become an informed participant in choosing your treatment regimen. Don’t be afraid to ask your doctor challenging questions, and try to take it one day at a time. Focus on what you can do, and make sure you’re in capable hands for the things you can’t.