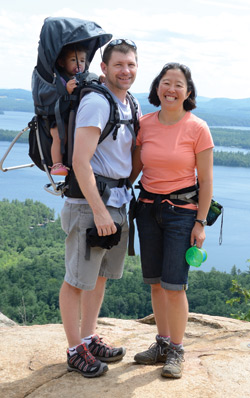 When Maki Inada, PhD, was diagnosed with Stage IIIB non-small cell lung cancer in 2008, it was completely unexpected. She was healthy and exercised regularly and had never smoked. The doctors quickly discovered that the cancer was caused by a mutation in the epidermal growth factor receptor (EGFR) gene.

Her cancer was successfully treated using targeted therapy (an EGFR inhibitor), along with systemic chemotherapy and surgery. Four years later, in the summer of 2012, Maki had a recurrence in the same lung. But after a second lung surgery, she is currently cancer-free.

Maki and her husband, Dr. Jeff Pleiss, live with their daughter in Ithaca, New York, where they enjoy hiking, running, biking and swimming. Both Maki and Jeff are biology professors, and Maki speaks often about her cancer experience, particularly with her students.

My husband and I had just moved to Ithaca in 2007 from San Francisco. In January, I caught my first cold and had a cough that would not go away for several weeks. I had not yet found a primary care physician, so my husband suggested I go to the convenient care clinic.

Luckily, the nurse on call took an X-ray and found a large abnormality, which was a shock. She kept asking me if I had ever smoked. I had not. They gave me antibiotics and told me to come back in three weeks. The repeat X-ray looked the same, so they sent me for further testing. I had a CT scan, a CT-guided biopsy and a PET scan all within a few days and was diagnosed with non-small cell adenocarcinoma.

Luckily, my best friend from graduate school is a pediatric oncologist at a major cancer center. She called and got me an appointment right away with a renowned oncology specialist.

After my examination – and given my Asian female nonsmoker status – the oncologist suggested that I take targeted therapy. He also recommended standard chemotherapy, I had a surgical biopsy in order to get enough of a sample for genetic testing.

This all happened very quickly. We were confident in the oncologist’s advice, so we followed his treatment plan. He worked with my oncologist in Ithaca, and I was able to have my treatment close to home.

I had four rounds of intravenous chemotherapy and 12 weeks of oral targeted therapy. My chemotherapy infusion was given one day every three weeks. I was very tired during the days following treatment, but with the exception of my hair falling out, I only experienced mild diarrhea and mild acne side effects.

Originally, I was not a candidate for surgery because I was Stage IIIB. I had a 7-centimeter primary tumor in my upper left lobe and two smaller lesions in the lower lobe. The drug therapy shrank my 7-centimeter tumor to smaller than 2 centimeters, so I was scheduled for an upper left lobectomy on July 2, 2008.

After surgery, I continued taking targeted therapy for two years until the summer of 2010. I went off the drug both to avoid inducing resistance mutations but also try to have children. I got pregnant right away, and we had a healthy baby girl the following summer!

I was cancer-free and busy with a new baby, and I thought cancer was behind me. But in the summer of 2012, a routine scan discovered two small lesions in my lower left lobe. It was quite a disappointment. Thankfully, the doctors were able to resect a small portion of my lung to remove the lesions. While the recovery from this second surgery was physically less challenging, the emotional recovery has been a bit more difficult.

I feel like there were a few days when I was really, really scared, but Jeff is the eternal optimist, and we tried to focus on other things. We try to stay active, and we have great support from our family, colleagues and friends.

I definitely believe targeted therapy is the way of the future for cancer treatment. I was very fortunate to fit the profile and then to have a treatment work so successfully. Of course I know there is no guarantee, but it keeps me focused on doing what is most important each day.