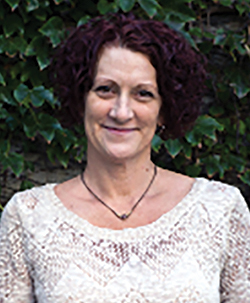 In September 2011, a Stage IV adenocarcinoma of the lung diagnosis took Lysa Buonanno, 40, completely by surprise. Years later, she is managing her disease successfully, thanks to a comprehensive medical team and a wide support network. Lysa’s words to live by: “You never know how strong you are until being strong is the only choice you have.”

I was suffering from what I thought was a pulled muscle in my back, but after four months, the sporadic back pain was much worse. My mother convinced me to see a doctor, so together we visited a walk-in clinic. An EKG and X-ray prompted the doctor to send us directly to the emergency room for more testing. I was concerned I might have something serious that would keep me off my feet for months, like a slipped disk. Cancer wasn’t even on my radar.

The ER doctor told me my CT and MRI showed lung cancer with a tumor that was wrapped around my spinal cord. Because they felt paralysis was an immediate danger, they admitted me to the hospital right away.

The news devastated our entire family. I was happily married with a son (19) and a daughter (11). I had just graduated from college the month before, and I was excited to start a new chapter in my life as a radiology technologist.

We had only been married six years, and it made us question everything, all our hopes and dreams. We cried a lot, and we picked each other up a lot.

Everything happened very quickly, and fortunately, I felt comfortable with the oncology team on staff. Seven days later, I had my first spinal surgery. My husband worked nights, so it was a balancing act with our daughter for that first 12-day hospital stay. My mom was by my side to help, and stayed by my side through it all.

Soon after, I began an aggressive two-week schedule of 10 radiation treatments to my pelvis and spine. We followed that with chemotherapy.

I took the chemotherapy drugs in succession, and that made for long days. We were usually there for seven hours at a time.

As a result of the chemotherapy, my primary tumor shrank by 70 percent, but I wanted to have surgery to remove the tumor. My doctor, however, informed me it was not standard protocol for Stage IV disease. I was disappointed but, at my doctor’s urging, I continued to take a maintenance drug for nine months — until 16 more tumors appeared.

Frustrated, I switched oncologists. On my second visit to my new oncologist, I joked that I wanted the tumor out so badly that I was willing to go out in the backyard and do it right then. Genetic sequencing had not yet been done on my tumors, and my doctor thought it was very likely I would have a genetic mutation. So after two failed biopsies, my oncologist asked, “Why don’t we just cut it out?” He picked up the phone, called a colleague who was a thoracic surgeon and asked his opinion. The surgeon agreed to assist, and the surgery was scheduled. I was floored.

It was a game changer. He literally saved my life.

To remove the tumor, the thoracic surgeon had to remove my entire lower right lobe, but that also enabled my medical team to perform mutation testing on the tumor. Three weeks later, my oncologist called at 10 p.m. to share the results: The tumor was ROS-1 positive.

This was very good news because of a targeted therapy treatment that is available specifically for the lung cancer population that tests positive for a ROS-1 tumor. It’s a rare finding in that only 1 percent of those with lung cancer have this distinction. I soon started treatment.

Throughout this experience, I relied heavily on research, learning from sites such as the American Lung Association and LUNGevity. I read scholarly articles and talked to patients in similar situations. I have found great strength in the friendships I have made through advocacy groups, such as LUNGevity and Inspire. I am active in LUNGevity’s mentor program and in Inspire, a lung cancer support group. And because there was no support group in my area, I started one. I have more than 150 survivors on my friend list, and I’m proud to say I’ve met about 90 percent of those friends in person.

I’ve lost a lot of friends along the way, but the best part of this whole mess is becoming friends with other survivors.

Three years later I continue to take the medication and have positive results. My lung functionality has diminished, but I feel great. Although I can’t run anymore, I stay active by hiking, paddle-boarding and playing with our dogs.

I’m still considered Stage IV, but the drug has kept me cancer-free since May 2013. I’m very grateful.